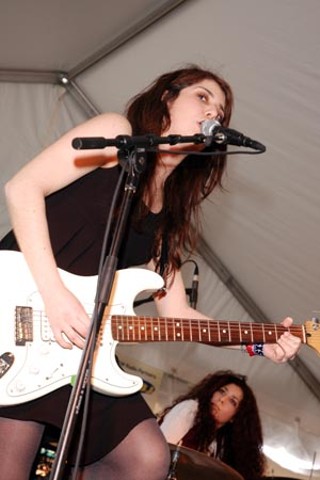 You might think we'd take it slow; kind of ease into the debaucherous spirit of SXSW. You might be flat-out wrong. At noon in the River City, the inside room at Emo's is full of leather jackets and Converse, despite the 75-degree weather. Local post-punk fourpiece the Arm wails onstage, but the spotlight goes to Alex Rodriguez's son Asher, who stops and starts with each chug of his daddy's bass. "We're also a comedy troupe," What Made Milwaukee Famous throat Michael Kingcaid jests outside. "I'm about to do a guitar solo." As the set of perfected pop gems flow into unsuspecting ears, Kingcaid begins to look more and more like Broken Social Scene maestro Kevin Drew. Yet where BSS bows down to masters in the jam scene, WMMF hits Elvis Costello's "Pump It Up" like an original. At the Emo's Annex, Canadian sirens Magneta Lane sway with the fury of Sleater-Kinney without the grunt. Next, Austin's Sound Team pogos Emo's outside with a fervor rarely seen in indie rock. The majesty and climax of "TV Torso" might be the one to beat over the festival. Back at the Annex, Dengue Fever, the L.A.-via-Cambodia sixpiece with smiles bigger than Texas, croons, and despite the grating presence of a sax, they start off SXSW 06 with optimism and grins.