You've heard the rumors. This band and that is playing an unannounced showcase somewhere during the festival. They're true, of course, but the best is the one that didn't happen: Morrissey's advance team was investigating the tiny Mean-Eyed Cat on West Fifth Street for a possible MTV-sponsored pop-in by the Mozzer (who, like the owners, is a rockabilly freak) when they caught a whiff of Pok-e-Jo's barbecue up the street, and the show was scotched quicker than you can say Meat Is Murder. Good luck finding a place that doesn't smell like roasted animal flesh this week, yo. On to the ones that are happening, or did: The Flaming Lips road-tested songs from next month's At War With the Mystics late last night at the Fox and Hound, but you still have a chance to see the Beastie Boys. Though it's a wonder they didn't skip town after the inane questions fired their way at the Convention Center Wednesday ("Do you guys smoke pot, and if so, do you want to hang out later?"), the trio will hit a downtown, outdoor stage 7pm tonight. The catch is, if it leaks to the press, the show is off, so if you want to know where to be (and your friends don't), e-mail cgray@austinchronicle.com before 5pm today.

Crisp and fluid at the Emo's day party Wednesday, Sound Team's songs expand and refract in waves similar to the abstract patterns on a Mac screen saver, so it's no surprise the local sixpiece – whose debut Capitol LP is due June 6 – invests just as much care into their visual projects. The latest is a six-foot square video wall composed of 40 televisions and DVD players they built in Marfa with assistance from former Austinite Adam "Earthpig" Bork. Hanging around the desert artists' colony was tonight's Charles Attal Management party headliners the Secret Machines, who filmed a mountaintop performance that Sound Team guitarist Bill Baird likens to Pink Floyd's Live at Pompeii. "We were doing the exact same thing at the same time," he smiles. "It was an insane orgy of film and recording." Sound Team will unveil this video wall, with footage shot by Baird, Matt Oliver, and former Adult Peter Simonite, at Friday night's party at their Big Orange studios, 1303-B E. Fourth St. Austin's red-hot Voxtrot and Philadelphia's Dr. Dog, who, according to at least a half-dozen people TCB talked to Wednesday, are the tits, play as well. E-mail rsvpbigorange@gmail.com to go. 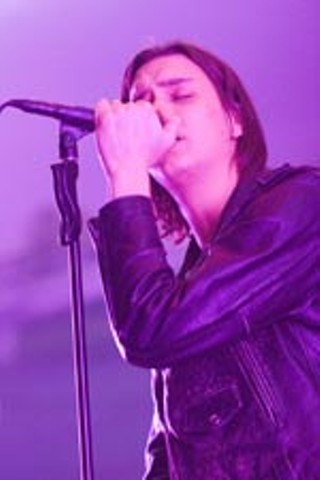 The Strokes' Julian Casablancas at Stubb's (Photo By Mary Sledd)

Though their stage posture was as mannequinlike as ever, the Strokes were as sharp as their hair was tousled at Stubb's Tuesday night. Considerably looser than their Spring 2004 show at the Austin Music Hall, the New York quintet brought out buddy Har Mar Superstar and – as astutely pointed out by What Made Milwaukee Famous singer Michael Kingcaid – completely ripped off Barry Manilow's "Mandy" on one song. Peter Gunn-biting recent track "Juicebox" even got a bigger pop from the sold-out crowd than 2001 breakthroughs (and Tuesday closers) "Last Nite" and "Hard to Explain." Thus began a whirlwind pre-SXSW bacchanal that climaxed at a South Congress shoe store around 4:30am, TCB and a whole mess of people (who know who they are) salsa dancing 'til sunup. All the Strokes did was pile into their tour bus and drive to Houston, so score one for the home team.