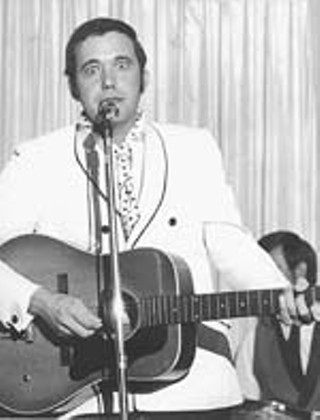 Bobby Bare is one of the last classic country singer-songwriters from the time before Nashville stars looked like lap-dancers and frat boys. It was a period when country could mean cornpone without shame and novelty wasn't the "N" word. With a string of hits including "Detroit City," "Dropkick Me, Jesus," and his first No. 1, "Marie Laveau," Bare moved in the outlaw crowd that counted Willie Nelson, Billy Joe Shaver, and Waylon Jennings among its membership.

In 1983, Bobby Bare embarked on a 20-plus year hiatus that ended with last year's The Moon Was Blue on Dualtone. Co-produced by his son, rocker Bobby Bare Jr., Moon is luminous: eclectic, even eccentric, choices that all work when shaped by Bare's experience.

"I've been doing what I've always done," says Bare, 70. "Go on the road, do shows, perform – everything except go into the studio and make records because radio stopped playing the old farts. They're on a search for younger people, so I decided to go fishing.

"I just like being on the water, loved it since I was 7. I get so excited when I catch a big fish, a big bad. I fish with Jerry Reed once a week. I have a whole lot of rods and reels, probably 30 or 40. When something new comes out I go get it.

"Ever seen a tarpon? I was fishing in Belize after a show. I had a plastic shrimp tied on and hooked something. I put some pressure on it. He jumped and it was a tarpon, bigger'n me. He looked me right in the eye and spit the lure. It zinged right past my head. I almost had a heart attack.

"I said, 'What the hell was that?' He broke everything we had, he was so huge and strong. That's my fish story."