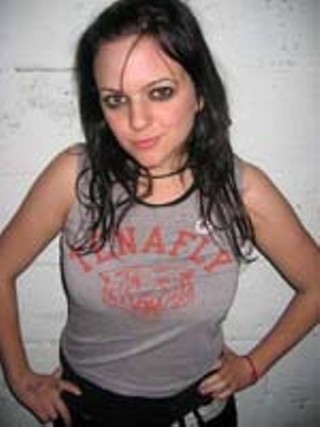 WHO: Bona fide love-or-hate-her NYC tastemaker Sarah Lewitinn. The New York Press ranked Lewitinn (aka Ultragrrl) No. 20 on their 2005 list of "50 Most Loathsome New Yorkers," citing her "Making Out With Ultragrrl" column in Spin and what they described as her "ultra-vapid sycophantic hipster blog." She's also one half of the immensely popular DJ duo Tarts of Pleasure. Her latest venture is running a record label: she's the self-described "Top Dog" at Stolen Transmission, a new Island Def Jam imprint that grew out of a singles-only label, where she released early 7-inches from Louis XIV, the oohlas, and Nightmare of You. Given her reputation for rallying behind new music first, we asked for a peek at her SXSW planner.

Morrissey: He saved my life in high school. Last tour, he played four shows in New York and I saw them all. I basically cried at all [of] them. I'm looking for that kind of depression to re-enter my life again.

Celebration: They're kind of like the Birthday Party if Karen O. was the singer – only with a deeper voice, maybe like the girl from Autolux.

The Alarm: Apparently I like the Eighties a lot.

My Chemical Romance: It's a private event, and I'm gonna get heat for saying this, but as far as I'm concerned, My Chemical Romance is as important to kids today as Nirvana was when I was in high school. I believe that. Look at MySpace: They're the third most searched words behind "html" and "video." To kids today you don't get any more important than My Chem. To see them in Austin in the middle of SXSW could be amazing.

Animal Collective: When I first heard them I thought they sounded like a bunch of retards clapping. Since then, they've developed into a band with great songs and a moving record. I love [Feels]. It's amazingly disjointed, but they manage to find a lot of melody in it.

The Fox and Hound: I'm there all night. Be Your Own Pet are just teenagers, but I keep hearing how completely composed and remarkable the lead girl is. Forward Russia's demos are amazing, and I've been really into Battle for a year or so. We DJ them a lot. They sound like a quintessential British band: It's dark, yet definitely pop.

Then there's She Wants Revenge, or what my friends call Interpol Wants Revenge. I fucking love Interpol. People kept sending me She Wants Revenge tracks when they first got signed, and it was always like, "I found your new favorite band." Then I heard them and was like, "Do people think I have the worst taste in music?" They're supernice dudes and somebody's buying a lot of it. Who knows, maybe it works live?