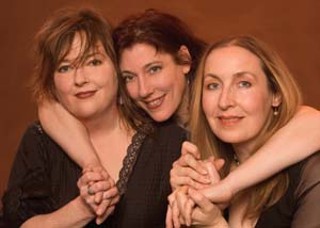 I hope John Doe stays away this year. There are two people in the world in whose presence I feel starstruck. I won't say who the other is, because it'd be embarrassing, but last year I had dinner with John Doe. It was a big to-do with a bunch of acts on the label, and influential UK deejay Bob Harris, who makes me a little nervous, too.

So a big group of us meet up on the street in front of the restaurant. John Doe ambles up a few minutes late, all hot (but cool, you know) and someone says, "I'd like you to meet ..." I took his hand and started to weep openly, babbling something like, "I wish you knew what your music has meant to me." Needless to say, his reaction was one of bemused disgust.

He sat two chairs down from me, and I picked at my food, trying to think of something clever to say. Conversational redemption had to be within reach, right? I don't remember the two sentences we eventually exchanged, but I know they had to do with real estate, which I know nothing about. He has smiley eyes, and he made it seem okay, but it was a little death, and not the good sighing kind.

Please, someone, buy us dinner this year – but don't invite him, okay?

Oh, Lord, am I going to need socks? Tights? Last year I sweated through everything. I brought a travel iron and touched up my dress on the trunk of Sheri's car before the gig at Jovita's. I'm busy knitting a hat and scarf (in blue and brown, which won't match anything) in case it's cold like that one year.

The Chicas just got an invitation to play Alejandro Escovedo's Las Manitas party Saturday, but I don't know whether to take it even though it's always been our favorite thing. Why can't he be having it on Sunday? We're up to nine shows in four days. Oh, and the MySpace bus? Is it important for us to be on the bus? What will we do if we're on the bus? Visions of Girls Gone Wild.

Tonya and I have been commiserating about the dangers of walking down the street. On the way to El Sol y la Luna, we'll run into that sweet guy who put us up in 1997. He bought us a nice bottle of wine, gave us his last two clean towels, and played rare Nina Simone on his expensive speakers. We won't remember him. The conversation will be awkward. Thank God for Lynn, who'll remember him. We'll also run into the writer who gave us a lousy review, but we won't know it's him and we'll accidentally be nice. Damn.

Now that we're here, our plan is to wander the streets dressed as cigarette girls selling our new Chicas CD, but that gave way to some pressing needs: we buy me some new sparkly red, no-blister boots at Allen's, and then head to Target for bathing suits, sunscreen, and some new two-part mascara we'll share even though they tell you not to. Ran into Otis Gibbs on Congress and he remembered it was Thad Cockrell's birthday, so we called and sang to him in line for coffee at Jo's. Nice to send this fine Austin feeling back home. It's all just starting, but we're feeling tippy-top. See you 'round.