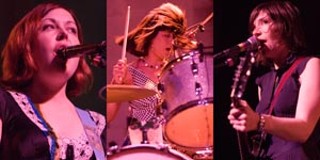 Things have already gotten off to a rocky start for yours truly, thanks to a restless seven-month-old who thinks 2am is a perfectly dandy time to wake up and play. This after I kicked off SXSW 06 at the Film fest's closing party Tuesday night, featuring the clarion cry of Sleater-Kinney (right). The ladies tore it up after a taped intro by everyone's ideal spokesperson for grrrl powah, Henry Rollins, the cinderblock aesthetic of Guerrero's Produce Warehouse – site of last night's Echo & the Bunnymen "Killing Moon" – notwithstanding. In attendance was new Portland resident Britt Daniel leaning nonchalantly against a cement pillar and listening intently. Finally, S-K has some hipster cred ...

Let's face it, Wednesday's day parties were either dull as dirt – yeah, I said it! – or too full to squeeze in (hello Octopus Project). Now that everyone's figured out that day parties can quadruple your musical intake, all those damn magazines, which are nameless anyway, have gotten elitist and invite-only on us. Which means that the really primo stuff is off-limits to the proles. That doesn't mean there weren't good acts to be savored, however. Just take a look at the local part of the lineup at Emo's TagWorld party: two of Austin's best indie rock bands in What Made Milwaukee Famous (now signed to Barsuk) and Zykos (starting from scratch after being abandoned by Post-Parlo), plus our most recent major-label signees Sound Team, and Secretly Canadian's I Love You but I've Chosen Darkness. What's Austin about in 2006? Those four acts are a good place to start.

Was anyone else less than impressed with the format of the Beastie Boys' interview? I get the concept: put the control in the hands of the audience, just like the Boys' new fan-shot tour documentary, Awesome: I Fuckin' Shot That!, which premiered at this year's film festival. But when you get every dweeb in the galaxy asking why the Brooklyn trio doesn't play hardcore anymore (they do), things get a bit tiresome and rather than any sort of meaningful discourse happening, we get Mike D wisecracking about Purple Rain and Pampers. Oh, right - now I remember! SXSW is actually about unsigned acts ...

One party I'm fairly certain will not include uninformed know-it-alls and the wanton exhibition of perineums is the fourth annual Roky Erickson Psychedelic Ice Cream Social noon-5pm today at Threadgill's. This year, in addition to the Secret Machines and the Minus 5, Roky and his Explosives will play a full set while you munch on free ice cream from Amy's – what better way to celebrate this vibrant third act in an iconic artist's life and career? Brother and guardian Sumner Erickson agrees, stating that, "Roky is really enjoying his life. The third act will be the best." This is due in no small part to this community, which has outdone itself in rallying around Roky's cause, changing his life for the better in the process. Pat yourself on the back when you shell out the cover, because you're helping preserve an Austin treasure. Then eat $30 worth of ice cream.

It's Hip to Be Sliced

Nothing goes with music and all that beer like pizza, so be sure to peep Music by the Slice, three days of SXSW at SoCo's hippest new joint, Homeslice Pizza on South Congress. Owner Joseph Strickland explains that hosting day parties is a logical extension of Homeslice's mission, which is to be a presence in the community without resorting to advertising (hey, wait a minute ...). The lineups for each day's parties can be found at www.homeslicepizza.com. Be sure to bring cash, too; the bands may get free pizza, but your ass is paying.

Five Things You Should Know About Pizza 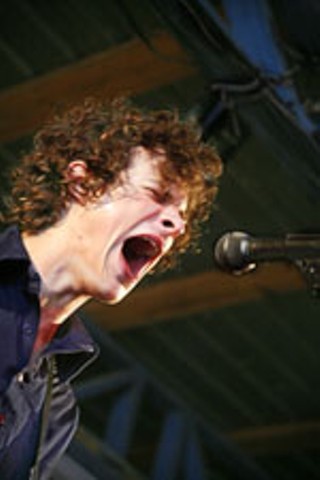 2) If it ain't hand-tossed, truly, you're dealing with tossers.

4) Pizza was invented in New York, not Italy. Or at least perfected there.

5) Pizza is fun. Where else can friends stick their hands in your food and not get your fist to go with it?