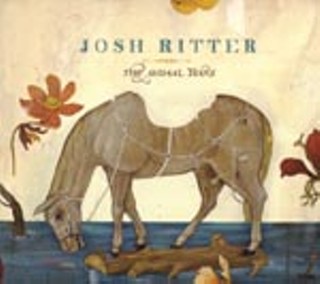 What happens when a singer-songwriter makes a transcendent sophomore album, as was the case with Josh Ritter's 2003 release Hello Starling? It sets the bar ridiculously high for a major-label debut, that's what. The first few spins of The Animal Years, Ritter's third LP, might inspire such pondering, as it drags at first. Then something magical happens. The music opens up to unsuspecting ears, such as when the organ's thoughtful, deliberate strokes cushion Ritter's poignant vocals on "Girl in the War." It's interesting to hear a folk album with more rock & roll production frills, but the effects don't detract from the overall message; when Ritter growls his way into "Lillian, Egypt" and roars into character in the rollicking tune, the song retains its folk aesthetic even if it's ratcheted up a notch. Call it Xtreme Folk. Ritter's back to his sweetly sensitive self on "In the Dark," a slow, nostalgic lullaby that's in no hurry to get where it's going. It would make a nice companion to Starling's "Kathleen." The Animal Years sneaks up on the careless listener, who might rush to judge the album as dull. Are you listening? (Friday, March 17, 6pm @ Town Lake at Auditorium Shores; Saturday, March 18, 12mid, Eternal)