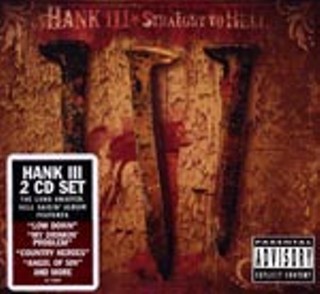 When he performs live, Hank III can be loud, proud, and metal, or the honky-tonkin' grandson of Hank Sr. With the 2-CD Straight to Hell, III's hard rock is absent, but one thing's for sure: his coarse worldview is perfectly in sync with his country side. Williams nearly bursts with mind-altered defiance on "Pills I Took," "Smoke & Wine," and "My Drinkin' Problem." He may borrow his outlaw stance from his daddy, but Williams is obviously following a more sinister muse than Bocephus ever conjured on the wickedly dark "Country Heroes" and "D. Ray White." Meanwhile, his poke at Hank Jr. hanging with Kid Rock in "Not Everybody Likes Us" is sure to make for lively dinner table conversation. It's ironic that Williams still sounds a lot like Wayne "the Train" Hancock, but then it's in his genes. Hell's second disc is an inexplicable collage titled "Louisiana Stripes," a fistful of high-lonesome tunes with noise, found dialogue, dub, reverb effects, stray telephone messages, and sounds ranging from thunderstorms to gurgling bong water that few will listen to more than once. (Thursday, March 16, 1am @ Antone's)