Band of Horses and Nobody & Mystic Chords of Memory

Everything All the Time, and Tree Colored See (Sub Pop) 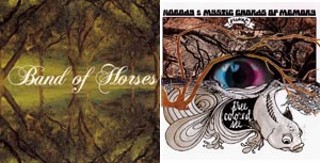 Everything All the Time (Sub Pop)

Nobody & Mystic Chords of Memory

Not since Shins debut Oh, Inverted World and Beachwood Sparks' Once We Were Trees distinguished themselves as twin valedictorians of Sub Pop's class of 2001 has the Seattle indie sponsored a frontrunner like Band of Horses. Trading on the sparkling jangle of the former band and the big beat reverb of My Morning Jacket, guitarist/singer Ben Bridwell and bassist Mat Brooke bury their former Northwest melancholics Carissa's Weird with the woodsy cry of Everything All the Time. Shiny fragments "Part One" and "Weed Party" flesh out on relative epics like "Monsters" and "The Funeral," whose minor chord choir opens onto clamoring peaks and falling rain. In the land of 36-minute debuts, five-minute cuts are king. The Renaissance is further feted by Yoshimi bash meeting Bridwell's haunting vocalizations of "Wicked Gil," as the music mediates with post-Americana edge. The bottomless buoyancy of "The Great Salt Lake" and closing penitent "St. Augustine" complete the highlight trifecta. Beachwood whisperer Chris Gunst, meantime, with Mystic Chords of Memory partner Jen Cohen (the Fairways), wafts yet more gauzy Trees psychedelia in conjunction with L.A. revisionary Nobody (Elvin Estela). Delicate fog pop for water pipes, bubbling without "Memory," an outgrowth of the spacey desert drift of "Coyote's Song (When You Hear It Too)," Tree Colored See ebbs and flows like Beachwood Sparks in dream state. The dancing riff of "Walk in the After Light" glints like twilight against the strum and burble of "When the End Meets the Beginning," whereas "Softer Sail" twists gently against rain-stick closer "Floating." Band of Mystics. (Band of Horses: Friday, March 17, 11pm @ Red Eyed Fly; Nobody & Mystic Chords of Memory: Thursday, March 16, 11:30pm @ Zero Degrees)