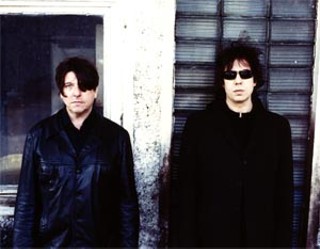 Waiting for my men: Sergeant and McCulloch (l-r) do Cale and Reed.

The Merseyside port of Liverpool languished with one of the UK's highest unemployment rates in the late Seventies, so four young Scousers found work threading the decadent psychedelia of the Doors and Velvet Underground through the ongoing upheaval of punk rock. Calling themselves Echo & the Bunnymen, supposedly after their first drum machine (a story that was later disavowed), Ian "Mac" McCulloch, Will Sergeant, Les Pattinson, and Pete de Freitas eschewed the New Wave trappings of fellow Liverpudlians Dead or Alive and the Teardrop Explodes for the gloomy guitars of 1979's Crocodiles.

That debut, however, doesn't begin to hint at the pop majesty soon to follow: "The Cutter," "Killing Moon," and "Bring on the Dancing Horses." De Freitas died in a 1989 motorcycle accident, and Pattinson left after 1997 reunion album Evergreen, but McCulloch and Sergeant are in fine icy form on 2005's Siberia. The guitarist recently reflected on nearly three decades of songs to learn and sing while knocking about in his kitchen.

Austin Chronicle: When did you first pick up a guitar?

Will Sergeant: I had one when I was 13, but I didn't even get it out to tune it. I used to just make noises with it. I sold that and didn't get another one until I was 19, 20, around 1978. I found a cheap, crappy one that I swapped off me mate for a pair of plastic trousers.

AC: When you were starting out, was there any rivalry between Liverpool and Manchester bands?

WS: Not from us, anyway, because we were into a lot of the Manchester bands. Joy Division and the Fall were two of our favorite bands. All the bands used to come over from Manchester and play Liverpool. We'd all go and see them, and I can't remember coming across any intercity rivalry. The whole punk rock thing was very fresh then. Everybody was on the same side.

AC: Did you wind up traveling in the same circles?

WS: Yeah. We did quite a few gigs with Joy Division early on.

AC: Could you tell they were a great band back then?

WS: Yeah. They were amazing. I didn't even know what stage presence was, but I knew that there was something going on. We were on a little label called Zoo, and we had this festival that was like Zoo meets Factory. We had it at a place called Leigh, which is halfway down the M62, the motorway between Liverpool and Manchester. They're only 30 miles apart. All the Zoo bands were on, and all the Factory bands were on. I think Joy Division were headlining, because obviously they were the biggest band of the lot at the time. It was just amazing. It was getting dark, and I remember there wasn't that many people there. I think there were about 400 people there in this big field.

AC: How do you think the early Bunnymen albums have held up over the years?

WS: I think pretty well. You can tell by the current crop of bands that are out now. When we made them, we weren't thinking, "Let's make an album that's just going to last a few months and be flavor of the month and that's it." We were thinking, "Let's make a timeless record." That was always our thing. That's why we avoided trying to use sounds that were trendy back then. There was one particular synthesizer called the DX7, which everyone seemed to have on all the records. As soon as you hear that, you know it's an Eighties thing. But "Killing Moon," you wouldn't know when it was from.

AC: Which songs are the most fun for you to play live?

WS: The rockers, really. They're a bit more aggressive. "Crocodiles," that sort of thing, "Over the Wall." I like playing "Killing Moon." Even though it's a bit ballady, it's twisted and dark.

AC: How did you guys feel when Donnie Darko came out, and all these bands started citing you as influences?

WS: We just got asked, "Do you want to let this bloke use 'Killing Moon' in his little indie film?" "Yeah, OK, whatever." We just had to sign this little bit of paper. We generally do sign little bits of paper that come through the office. We don't turn many things down. So we didn't think anything of it, really. Then all of a sudden it became this big cult film. I think it's done us quite a lot of good really, because it's brought us to the attention of a lot of younger people. The same way we brought attention to the Doors in the Eighties when we were getting up there. We were always going on about the Doors.

AC: Were the Doors not that popular in England back then?

WS: No, not then. They were forgotten completely.

AC: What did you think of the way they used the song in the movie?

WS: Well, obviously I preferred it at the front of the film. I know he's moved it in the director's cut, hasn't he? I've only seen it once. It wasn't really my sort of a film.

AC: What was the mood in the studio for Siberia?

WS: It was pretty good. It was a general mood of "This is going well." There [were]n't really any problems. The only problem we had was early on we couldn't get a bass sound that we were happy with. We kept blowing up amps. Our bass player at the time, his amp had broken and we had to borrow some amps, and we just kept blowing them up.

AC: Despite the title, it seems like one of the band's warmer albums. Agree?

WS: Yeah, I probably would. But you don't judge a book by its cover. Porcupines isn't all about ice, and it isn't about porcupines. It fits in with our other album titles, really. Nobody said, "Crocodiles doesn't feel like a crocodile." It's just one of the lyrics. It's a nice word, and it's got imagery.

AC: Do you and Mac work pretty well together these days?

WS: Yeah. He'll come up with something and play it to me, and I'll add bits to it, and we'll juggle it around a bit and make sure there's space for everything to go on or come up with new bits. Or I'll have some stuff that I've maybe recorded here in my little studio downstairs and then stretch things or shrink things to fit vocals, or we'll just sit down together me and him and come up with things there and then. We're never short of ideas, really.

AC: How long have y'all known each other?

WS: It all stands from this club we used to go to in Liverpool called Eric's. That was like the punk club. I'd basically go in there starting in the summer of '77, and I'd see him around there, but I didn't really know him until about 1978. It's one of those places, Liverpool: You have a lot of mutual friends. You get to know everybody in the end, because they know somebody you know. It's pretty small.

AC: Back in those days, what were your other career options?

WS: At the time I was training to be a chef.

AC: Do you still cook?

AC: Are there any songs fans won't let you off-stage without playing?

WS: There's loads that our fans are into. It's not like we've only got "Killing Moon." We've got tons of 'em. "Never Stop" we've been playing, that's been going great. "Cutter." "Back of Love." You see some bands, and they get fed up playing their old songs, and I never get fed up playing them. You can see that the crowd are into it, so how could you be fed up with that? It's ridiculous.

I went to see this band that I really liked from the Seventies called the Groundhogs. They had this great song called "Cherry Red." When they played it, which was the one everybody wanted to hear, you could tell they were pissed off playing it. It just ruined the whole thing for me. It's still a great song, what's your problem? I'll never be fed up with playing "Killing Moon" or "Back of Love."

WS: A lot of those covers came from this tour we did, and the idea was we didn't have a support band, so we went on and did our own support doing covers. It was in Sweden and a few other places we played. We went on and did 30-40 minutes of Velvet Underground songs, Television, people like that.

AC: Not many bands open for themselves.

WS: Yeah, we liked to do weird things like that back then. It's a bit hard to do that stuff now.