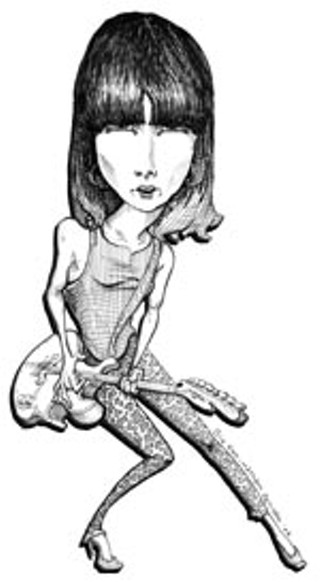 She won the hearts of fans everywhere in 1980, telling the world that she was not only special, but to fuck off. Since that fortuitous debut, the Pretenders' Chrissie Hynde has stood for everything that's right about rock & roll: the beat, the sound, the look, and the attitude. In a recent conversation from New York, she reminisced about going back to Ohio, the needle and the damage done, and what happened on a Sunday night in February 1964 that changed rock & roll forever.

Austin Chronicle: Is Akron, Ohio, even more different today from that changing city in "My City Was Gone"?

Chrissie Hynde: That's an interesting subject. It's something that's happened all across America. Touring, I get to see a lot of American cities roughly the size of Akron, previously industrial cities. Akron was very blue collar and had all the rubber factories. In the Seventies, they basically tore the whole city out for a whole lot of reasons – racial, economical. People started going out into the suburbs. It really destroyed the inner city. That happened in a lot of places. I really pay tribute to the gay community for resuscitating and saving a lot of areas in inner cities. They got in and rehabilitated certain areas and neighborhoods.

AC: Does the gay community have a clearer sense of history?

CH: It's a clearer sense of aesthetic. They don't have children and families to look after, so they have more money and time to devote to it. They have the taste and the sensitivity to restore and recognize a beautiful old house in a sleazy neighborhood. I think the gay community saved America from destroying itself and its cities. I really do. They're the uncelebrated heroes of the day.

AC: When you pick songs for concert set lists, how does audience expectation weigh against promoting new material or what you personally want to play?

CH: Of course I don't want to pander to an audience. On the other hand, I have to acknowledge that most of my life I've spent as an audience. I've been more of an audience and a fan than a performer. I'd rather do the songs I want to do, but then I know the hits will excite people because it's what they know and what they've heard. So I split the difference and come up with a set.

AC: Do you remember watching TV, that first Beatles show on February 9, 1964?

CH: I remember exactly where I was sitting. It was amazing. It was like the axis shifted. I remember the first time I saw the 45 in the record bin in the discount house where my parents shopped and held it in my hand. It was kind of like an alien invasion. If you were a little virgin and didn't want to grow up like I didn't, didn't want to enter the adult world like I didn't, it gave you some kind of new avenue of sexuality. It could be more cerebral. You didn't have to actually touch the person's acne.

AC: What I remember too were the boys who came to school the next morning without Vitalis in their hair. And the ones who washed out the grease at lunchtime.

CH: Yeah! They all combed their hair down and made bangs! Me too! I could never set my hair in rollers again. I combed it out straight and cut my bangs. Oh yeah. It was a whole other thing. But there were only 12 people in your school like that. It wasn't like now when everyone gets in on it.

AC: Are any of your kids musically inclined or playing in bands?

CH: Well, if they are, I don't want to talk about it. I'll tell you one thing though, they'll probably want to talk to you about themselves one day.

AC: I live in Austin, and I'm in the phone book.

CH: Oh, you're in Austin! Do you know the Sexton brothers?

AC: Since they were kids. Before they played music.

CH: Aren't they gorgeous? They're fantastic! Charlie is a champ all the way. He's got such style. He could have been in the New York Dolls. He's got it all, man. He's the definitive guitar hero, if you ask me. He plays great. He looks amazing. He's a lovely guy. He's a real guitar guy. If there's a party, he'll end up with another guitar player in the corner just talking guitars. You always need one in your band.

AC: When I was looking at the Rhino box set, I paused on "The Needle and the Damage Done." I know Pete Farndon was first let go from the band because of heroin and then James Honeyman-Scott died two days later from drink and coke. ... If you could do it over, would you have tried to stop them?

CH: Are you kidding? If I could do it over again, I would have tried to stop everyone. If I could do it over again, I'd have stopped myself. But you can't do it over again. I don't have that, "Oh, I don't regret anything" thing. I regret all sorts of shit. I'd love to think that Jimmy was still here and that he hadn't copped on a night of getting all fucked up and that Pete hadn't gotten all fucked up. What can you do about it? I'm not sentimental about it. You say, "if I could change it," but that's hypothetical. That doesn't exist. I couldn't change it then. I can't change it now.

CH: Rock & roll is a big subject, a lifestyle, the way you view the world. It's not about the Grammy culture. It's not about awards. It's not about any of that shit. It's about your own little secret world, the way you live it. It doesn't change. It doesn't reinvent itself. It stays the same and is true to itself. To me a lot of that has to do with your own personal realization, your own consciousness. Throughout the years, I've always been surprised and disappointed, for example. And anyone could say I'm being naive, and to them I'd say go fuck yourself.