I Am the Resurrection

"If anyone believes in me, even though he dies he will live, and whoever lives and believes in me will never die." – from an old rock & roll parable

Roky Erikson and Harry Allard (Photo By Will Van Overbeek)

"Zilker used to be right in my back yard," Erickson told the Chronicle's Greg Beets just prior to his first major concert in nearly 20 years. "We went down to Barton Springs, and we went to Barton Creek and saw turtles."

Can you imagine? A musician who helped set fire to the Sixties is as Austin as Austin does – as River City as its springs, creeks, and turtle world. Some Austinites believe our state capital to be the center of the universe, and musically preaching, who says it isn't? Not me. I bear witness to the resurrection, and so has every Tom, Britt, and Harry Allard held in thrall by a bona fide, live-in-the-flesh musical miracle in the aftermath of SXSW 05, where Erickson's annual Ice Cream Social mowed down those crucial first dominoes.

Well-documented decades passed before Sumner Erickson rolled away the stone blocking his brother's cave ("Starry Eyes: Roky Erickson Is Back," Music, December 30, 2005). As a result, "I Walked With a Zombie" is crippled no more, ambling easily among us as an enduring gift of Texas garage pop rather than chapter, book, and verse on much darker annals of Lone Star history. Headlining the 2005/06 Austin Music Awards while guesting one of his early muses, Powell St. John, marks another accession for the 13th Floor Elevators' two-headed dog handler, and if this Old Testament world were just and holy, it would serve as a stepping stone to the White House, the Kremlin, the Rock & Roll Hall of Fame. Roky Erickson lives.

So does Kris Kristofferson, God love him ("Lone Star," Music, February 24, 2006). Music's Rhodes scholar, Brownsville's face of Mount Rushmore, John Sayles' Lone Star sonofabitch, Kristofferson's back for more Austin sessions. New to Austin's New West corral, This Old Road proves all roads lead to Austin, or at least San Antonio; Don Was' spare production and Kristofferson's naked truths play out like Robert Johnson singing to a wall in an Alamo City hotel early last century. Words crackle wry and wise in Kristofferson's deadwood delivery. Was also presided over Jessi Colter's full-bodied Out of the Ashes (Shout! Factory), so the union of Shooter Jennings' mom and his father's fellow Highwayman is what country music jukeboxes are made of. Any Ashes Colter and Kristofferson care to shift through together, like "Rainy Day Women #12 & 35," will leave a burn. Light a candle for Kenneth Threadgill, and watch for the specter of Janis Joplin if Kristofferson unholsters "Me & Bobby McGee."

Burn one also for Jon Dee Graham, and if there's any shootin', get behind this career solider waging The Great Battle, New West again; but let us not go there: "A Hell of a Year," Music, October 21, 2005. Everyone faces the great battle, Austin's just fortunate Graham's done it with a Stratocaster, an ashtray, and determination. From the True Believers to the Saxon Pub's Sunday supper club with the Resentments, Graham's true-blue heart aches in all of us. Accordingly, Graham's castle, the Continental Club, posted potential scripture in its latest club add via its Wednesday night monarch: CD release. The Austin Music Poll, 25 years representing this month, attends its singer-songwriters with sovereignty. Let us speak of it again in a year's time.

Good sister Eliza Gilkyson soothes the Austin Music Poll's fevered brow. Last year's Paradise Hotel (Red House), like Hard Times in Babylon and Land of Milk and Honey before it, swung open its hearth like a house of worship. Gilkyson's songs of the South ripple both feminine and feral, so when she suggests "Man of God" pay dearly for his sins at the Austin Music Awards, who would dare stop her? Not this man of God. Join her with Jon Dee Graham, and the road to Damascus ends at Third & Nueces.

Twine Time speaks to the soul of a man, Paul Ray, and on one sole frequency, 90.5, KUT. The Cobra that once uncoiled Stevie Ray Vaughan held court at the very first Austin Music Awards at Club Foot in 1982, in the slumming heart of Sixth Street, meaning that only a steel-string salute is suitable for this departing emcee-for-life. Guitars a Go-Go; Austin's Burnin' Mike Vernon and his 3 Balls of Fire crossing axes with the Fireballs' ("Sugar Shack," "Bottle of Wine") legendary fret-burner George Tomsco; and L.A. session stinger Jerry Cole, whose work with Sinatra, Presley, the Byrds, and the Beach Boys will outlive us all, step into the breach. The Boom Chica Boom girls bump 'n' grind the go-go into these guitars. AMA supergroups separate the men from the kid bands, and this feast for gunslingers smacks of the real Last Supper.

Which returns us to the scene of the crime, the birthplace of Austin rock, the Red River district, from whence Black Joe Lewis, Walter Daniels, Chili Cold Blood, and the rest of the Red River Revue wellsprings. When Lewis hollers his best Wicked Pickett, Daniels' flame-throwing harp screaming like Little Walter lit to the nines, the hombres of CCB can only tug at their sombreros and cut a swath through the low-down and modern punk blues with the barbed-wire tear-all of pedal steel and guitar embroiled in a cat fight. The Holy Ghost of yesteryear's Austin blues joins a new generation of father figures and bastard sons. A command from on high summons it all home at 7:25pm: 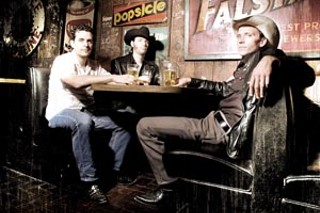