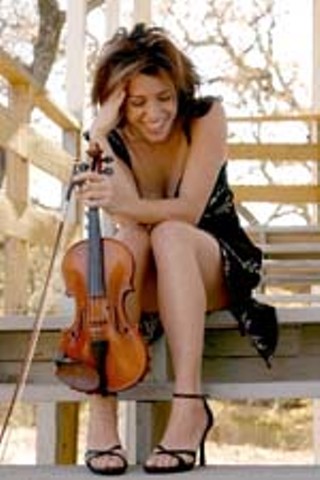 Very few Austin musicians saw as much excitement in 2005 as Elana James did. The top-notch fiddle player's band, Austin's swinging Hot Club of Cowtown, broke up. Then she turned around and became the first female instrumentalist in 30 years to join Bob Dylan's band, touring with the music legend in the spring.

"People can't pronounce Fremerman or they couldn't spell it properly," she explains. "So I figured 'why not'? Not enough people knew about me for it to make a difference. If you are looking for a Western swing fiddle player named Elana, you'll find me. Plus it's from my middle name – Jamie – so it's not like I pulled a name out of the ether."

Beginning in 1997, James fronted the wildly popular Hot Club of Cowtown along with guitarist Whit Smith. She seems downhearted about the band's demise.

"We had a somewhat tempestuous run," acknowledges the fiddle player, "marked by great success, then internal angst, career advancement, and finally personal setbacks. Eventually Whit decided he didn't want to do it anymore. He just hit a wall. That was a really disappointing thing. He might say he just wanted to do his own thing and that he was sick of working together as a partnership. It was like being married without some of the benefits. I think in some way we had stalled out artistically. We were unable to get along so that we could grow."

Like many breakups, however, this one set off a chain reaction of possibilities.

"It forced me to look in other directions," she agrees. "I was so glad that Bob called me. It was like the heavens opened."

Dylan found James when the Hot Club toured with him and Willie Nelson on a run of dates played in ballparks in 2004. "I got invited to sit in with Bob's band one night during that tour," she recalls, "and they kept on inviting me back."

She's sworn to secrecy on some of the behind-the-scenes info on working with Dylan, but found the experience exhilarating. "He was very generous and put me center stage next to him," relates James. To her credit, several reviews from the 2005 tour spotlighted her appearance.

In October, the slim brunette decided on fronting her own band with Hill and Sample as the Continental Two, who have a recording already and a new disc planned for April release in Europe. In the meantime, she's shopping for a label in the U.S.

"It's such a pleasure to work with these guys," she smiles. "They're just so talented and smart," and she adds with a slight snicker, "and reasonable."