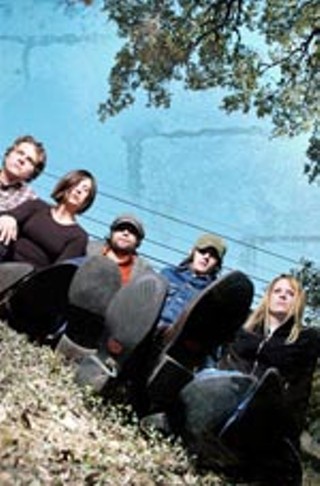 It's not often that a band's performance can actually make you feel like you're having a flashback. Such is the dark charm of Austin's Black Angels.

Their descent has occurred rather fast since forming locally in 2004. Singer Alex Maas, guitarist Christian Bland, drummer Stephanie Bailey, bassist/guitarist Nate Ryan, keyboardist Kyle Hunt, drone manipulator Jennifer Raines, and, more recently, projectionist Richard Whymark gigged around town, and rumored marathon multimedia performances only added to their red haze. The grainy video element gives their live shows an eerie glow that might cause the aforementioned hallucination, but their lysergic tones and feral rhythms are what pull like quicksand.

Last year saw the release of their four-song EP on Seattle's Light in the Attic Records, an album that birthed their love child: clean, minimalist tones dosed with Brian Jonestown Massacre's psych adrenaline. Their debut full-length, Passover, out in April, channels the spirit of some dusty Texas roadside, drunk on peyote and howling at the moon, much like another psychedelic parent.

And Passover is anything but. It's a heavy, dirt-caked, war-is-hell opus of drone, Maas' strident voice rising and falling like a napalm bomb. The title even references a verse from Exodus 12:12-13: "The blood was a sign to the death angel to pass over their homes." From the viscous blues of "Black Grease" and ominous guitar scrape of "Manipulation" to Maas drawling, "You gave a gift to me in my young age. You sent me overseas, put the fear in me" on plodding opener "Young Men Dead." It's definitely, well, dark.

"I can see where people would think that, but we just sing about real life," Bland explains. "Our world is a dark place. It's not like we try to be dark. We're all happy people, but we just see things from a skewed perspective, I guess."

The themes of war and destruction are myriad on the album, but so are questions of love, death, values, and whether our generation is as fucked as our parents'. The Black Angels are just channeling something higher.

"The entire album parallels what's going on now with what happened in the Sixties," explains Bland. "The Vietnamese war is about learning from our mistakes so that we don't ever fall into the trap of a second Vietnamese war, which the current war in Iraq is panning out to be. I don't see us as being completely political; we sing about life and truth, and politics just happens to be one facet of that. We do have a message, and it's one of getting people to open up their minds so they can let everything come through."

Texas psych is rising again, and it's a bad moon.