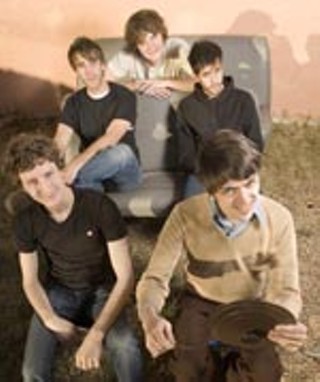 There's a girl in South Austin who believes in three main food groups: cotton candy, funnel cakes, and s'mores. It's not difficult to imagine her in a minidress and white tights, running across a meadow in slow motion with Voxtrot as her soundtrack. No holes in the ozone, no wars in the Middle East, no bills to pay.

While kindred spirits in the pop milieu tend to put a happy face on depression, Voxtrot isn't afraid to smile. The voice and hop behind the band, 22-year-old Ramesh Srivastava, grew up on a steady diet of Sixties pop, the Beatles, and Elvis Costello, an eternal gift from his parents, no doubt. After meeting bassist Jason Chronis – the young man with the Paul McCartney do – those musical "gateways and corridors" led to a shared love of the Smiths and New Order.

"It's going to be regurgitative at the beginning," Srivastava admits. "But the longer you do it, the longer it's you. For me that was the music I loved, so I wrote songs like that. And I'm totally okay with that, actually."

A musician owning up to his influences is a rare find in these days of rehashed music and the "new, clean America," as Srivastava refers to the influx of mall retro rock. Voxtrot wears its mentors on its sleeves, and it's refreshing, giving the music a hint of naivete and nostalgia that's sticky-sweet.

Mothers, Sisters, Daughters & Wives is Voxtrot's second EP, following last-year's unforgettable Raised by Wolves, both on the band's own Cult Hero Records. A five-song trek through sprawling, hook-laden epics, MSD&W is a family outing, all sun rays and picture clouds with added horns and strings. Underneath the catchy lyrics and bounce, there's more. Is there anything more important than melody?

"I love melodic music, but normally the melodic music I love has lyrics," Srivastava remarks. "Sometimes they go hand in hand, but there are instances like the Beatles where the lyrics are pretty negligible, and it's all about melody. I divide music into these two things: There are people who respond to music aesthetically and people who respond to music emotionally. Melody's really important, but I think it's also important to have this essential drive."

A glance around the room at any given Voxtrot show will take in cardigans and Converse mouthing along with a grinning Srivastava, arms swinging haphazardly into swaying hips. Voxtrot holds the audience in a clench of one pulsating palm.

"The more we play, the more it seems like people come who know the songs. Even though that's not the whole point, it's good to have a little reciprocity between you and whoever's in the audience."

Those shining faces staring up at Srivastava relish in this utopian dream. And yet life's no bowl of cherries. Sometimes a body needs something more nutritious than cotton candy, funnel cakes, and s'mores. While the new EP echoes the carefree Sixties, Raised by Wolves was a more nutritious affair. After all, as Srivastava shrugs, "It's gotta have a little anguish."