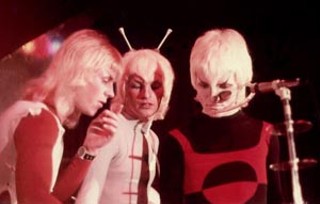 The World Cup may be months away, but this year's extended roster of international acts deserves a facsimile of the quadrennial global soccer championship's bracket system.

Heavy representation by more than a few German, Italian, and Dutch bands should challenge any latent SXSW Anglo-American rock-and-pop hegemony – even if there are a few ringers in the mix. Led by electronic deconstructionist Michael Beckett, the guitar-based Beautiful New Born Children from Germany find themselves doing the Blitzkrieg Bop all over again. Last year's Hey People! (Domino) is filled with three-chord, 21/2-minute miracles.

Meanwhile, New York expatriate Jason Forrest arrives via Berlin. On Shamelessly Exciting (Sonig), he chops and rocks like a latter-day Bartók. Ironically, to date, Forrest owes his fame to dropping mash-up discs under the name Donna Summer. Who knows what's in the water in Berlin? American minimalist composer Arnold Dreyblatt is also a resident. The Dreyblatt Ensemble plays the Central Presbyterian Church; his Cage-y Animal Magnetism (Tzadik) is magically far out.

Given the sinsemilla cloud hanging over the skies of Amsterdam, let the evidence show that the Dutch retain a bit of aggression. zZz may not top their Howler labelmates Bad Wizard's antics, but anybody who caught the sex-obsessed underground duo at SXSW 2005 knows that they'll turn your grease-stained garage into a dance floor – if it's dancing you seek. Gem shreds like the depoliticized prodigy of Gang of Four, which leaves last year's Tell Me What's New (Excelsior) splitting the difference between the Strokes and Iggy Pop. Holland's biggest-selling band, Racoon, takes a mid-tempo acoustic approach. Their 2005 English-language Another Day (PIAS) recalls the ill-fated Gin Blossoms. Those still wanting to gamble on the Dutch can choose between San Andreas and the Gathering.

A pair of bands from Turin, Italy, ups Western Europe's ante: Fortunately, nobody told Linea77 that rap-rock hybrids are a dying breed. There's something charming in the sustained energy of this former Rage Against the Machine cover band, which defines its music as "happy core." In addition to shouted lyrics, Linea77's banging rhythms should provide snowboard anthems for generations of Olympians to come. Subsonica updates and expands the head-banging mastery of Metallica on Terrestre (EMI). All sorts of unexpected electronic twists make us wish we had learned Italian in high school. To all the fine bands from Belgium Latvia, Luxemburg, and Spain ... mi scuzzi.

Down but certainly not out, it's best not to bet against the Eastern Bloc. The heavyweight is St. Petersburg's 20-year-old Auktyon ensemble, an ecstatic Russian eight-piece that mixes native folk and jazz into its pop-rock agitation machine. If Tom Waits remains outside the U.S. mainstream, imagine what he might have produced if his compositions actually had been outlawed – that's pretty much where bandleader Leonid Fedorov and his collaborators are coming from. Cover-girl beautiful despite her mullet, Lenka Dusilova is emerging as the Czech Republic's answer to Joan Jett and PJ Harvey; unfortunately, it looks like she's going to have to sing in English to gain acceptance in America. Patrolling the rock & roll sidelines, Turkey's Mor Ve Otesi and Serbia's Stuka deserve mention.

That leaves a grab bag of nationals from non-European locales. If this were soccer's World Cup, of course, more attention would have been lavished on Brazil. For those who have been grooving on Seu Jorge, who cashed in big with his Bowie covers in The Life Aquatic, direct your attention to Lenine. Lenine is Pele to Jorge's Ronaldo, a great master who years ago first helped bring Brazilian talent and traditions to the global stage. With his new In Cité (BMG) Lenine continues raising the bar.

From Mexico, comes the political-charged Los de Abajo, riding high on The Lunatics (Real World). Formerly signed to David Byrne's Luaka Bop, LDA scores on their latest with a marriage of Jamaican beats, norteño rhythms, and mariachi horns. Representing Africa is Wenge Musica, a Congolese group credited with popularizing modern soukous, an infectious blend of Cuban rumba, African rhythms, and Seventies dance music. Speaking of the Seventies, from a far-away galaxy (yet somehow signed to Alternative Tentacles in the Bay area) comes Zolar X, a glam band with nothing to lose but its Plutonian obscurity. Play ball!