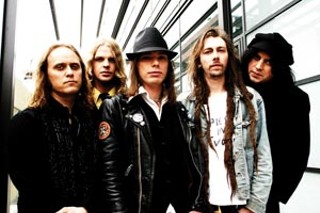 The five nations that make up greater Scandinavia are increasing their presence at SXSW 2006 by sending over a whopping 35 showcasing artists. Just as some scholars disagree on what the term "Scandinavia" should encompass both geographically and culturally, it would be impossible to define an overriding theme in this diverse armada of Nordic noise.

Over the years, Denmark has given the world Kierkegaard, LEGOs, and NFL kicking great Morten Andersen. More recently, the kingdom's vibrant music scene has spawned internationally noted acts like Copenhagen's the Blue Van, who rock the Jutland peninsula like it was swinging London-style circa 1965. The quartet's gear 2005 TVT Records slab, The Art of Rolling, sounds like a long lost Kinks album with Keith Moon filling in for Mick Avory.

Copenhagen quartet the Royal Highness revels in groove-laden basement rock that bears a passing resemblance to Soundgarden. Their debut EP, What Will Show, (available at CDBaby.com) is a remarkably potent brew coming from a band just over a year old. Århus post-punk quintet Veto fits right in alongside Eighties-tapping modernists like Interpol and Bloc Party. Unhinged vocal theatrics and plenty of quick right turns keep Veto's latest album, There's a Beat in All Machines (Tabu), alive and slippery.

Given its remote location and a total population of only 296,737, Iceland's disproportionate contribution to modern pop music is especially remarkable. Reykjavik's Dr. Spock describe their sound as "heavy metal cabaret with a dash of surf-porn cartoon funk," and the sextet puts forth all the zany, bass-thumping goodness such a moniker implies. Even better, they had the temerity to name their debut album Dr. Phil.

American talk show hosts also figure into the sardonic lyrical assault mounted by teenage techno-indie rockers Jakobinarina. The Hafnarfjörur-based sextet garnered a Rolling Stone rave with their hyperactive set at last October's Iceland Airwaves fest. Reykjavik singer-songwriter Thorir, aka My Summer as a Salvation Soldier cut his teeth in hardcore bands before going acoustic. His second album, Anarchists Are Hopeless Romantics (12 Tonar), resonates with the raw self-effacement of Conor Oberst. With plenty of torque and torment, youthful heavy metal scavengers Sign would've been right at home on the Sunset Strip in 1987. The Reykjavik quartet's 2005 album, Thank God for Silence (R&R Music), is their first in English.

With 12 acts making the trek to SXSW, Norway will be especially well represented at this year's fest. Oslo's Animal Alpha drive a glam metal jalopy headfirst into circus tent hucksterism, setting off an entertainment explosion that's good for the body if not necessarily the soul. Their full-length debut, Pheromones (Racing Junior), is the kind of product senators like to blame school shootings on. The Norwegian music mecca of Bergen is home to Annie, who delivers Tom Tom Club-style electro-pop in all its bubblegum glory. Her exciting 2004 debut, Anniemal, saw U.S. release on Big Beat last year. More recently, she contributed a mix album to !K7's DJ-Kicks series.

Hurra Torpedo achieved worldwide renown via an oft-forwarded Internet video of the track-suit-clad Oslo trio smashing out a rendition of Bonnie Tyler's "Total Eclipse of the Heart" on old kitchen appliances. Their last American tour – which included an improbable gig at Amarillo's Big Texan Steak Ranch – is the subject of a documentary called The Crushing Blow. Oslo artist Leif Inge is no less eclectic with his trance-worthy 9 Beet Stretch, a digitally-stretched version of Beethoven's Ninth Symphony that lasts 24 hours.

When Rhino gets around to putting out Grandchildren of Nuggets, the Jessica Fletchers' effervescent mix of power pop and psychedelia will be a prime candidate for inclusion. The Oslo quintet's 2004 album, Less Sophistication (Rainbow Quartz), is a must-have for mavens of the form. Magnet is Even Johansen, a Bergen-bred aural raconteur who adds a hint of broke-down twang to sweeping, Air-like electronic canvasses. His remake of Dylan's "Lay, Lady, Lay" with ingenue Gemma Hayes casts the classic in a whole new light.

Bergen's Real Ones are deft multi-instrumentalists who connect the dots between psych-pop, Americana, and globe-girdling folk in a manner that gives listeners a new bead on both. The quintet's 2005 album, Home With the Girls in the Morning, is a languorously melodic delight. Soul-stirring Oslo quintet Serena Maneesh won raves for their self-titled 2005 Honeymilk release by playing driving pop songs against a simmering wall of noise without sounding too much like the Velvet Underground.

Modern-day hesher gods Turbonegro have amassed a worldwide cult following of denim- and sailor cap-wearing brethren with tasteful hard rock anthems such as "The Midnight NAMBLA" and "Blow Me (Like the Wind)." Quiet Riot has nothing on the Oslo sextet's latest, Party Animals (Burning Heart). Oslo's We lands its punches in the same territory, alternating between Motörhead, Mötley Crüe, and Mudhoney on 2004's Smugglers (Nun Music).

Swedish pop music exports have come a long way since ABBA won the Eurovision Song Contest in 1974. Malmö pop collective the Ark shifted their focus from glam to disco for 2004's State of the Ark, giving them the campy, hook-laden patina of the Scissor Sisters. Stockholm singer-songwriter Ane Brun plies confessional folk tunes in the same vein as Joni Mitchell and Maria Muldaur. She duets with Ron Sexsmith, among others, on her latest album, Duets (Determine).

With eight members on board, Stockholm's the Concretes ably combine Spectoresque girl-group bombast with the lonesome highway pop of the Raveonettes. Their follow-up to last year's rollicking odds-n-sods compilation, Layyourbattleaxedown, is due this spring on Astralwerks. The whimsical salvage yard indie-rock of Stockholm's Envelopes leaves you feeling dizzy in a good way. Marching to an iconoclastic off-kilter beat, the quintet's debut album, Demon (Psychotic Reaction), comes off like a cross between Ween and Stereolab. Gothenberg-based singer-songwriter José González has a full-bodied voice that recalls Nick Drake and remarkable guitar chops to match, as demonstrated on 2005's Veneer (Imperial Recordings).

Although their m.o. has shifted from making eardrums bleed to making asses shake, Stockholm's Hellacopters continue to spread the gospel of Seventies-style rock & roll bacchanal with their ironically-titled sixth album, Rock and Roll Is Dead (Liquor & Poker). Stockholm's Emil Svanängen, aka Loney Dear, makes lo-fi rainy day bedroom pop with a hint of mischief, but then what do you expect from a guy who self-describes as "a one-man band with nine members"?

Gothenberg indie-pop quintet Love Is All builds an alluring, echo-laden racket out of bleating sax, booming drums, and high-pitched female vocals ã la Romeo Void. "Talk Talk Talk Talk" from their album, Nine Times That Same Song (What's Your Rupture?) is a chart-topper in a parallel universe. Looking forward to the future, Malmö electro-spaz-punk trio Quit Your Dayjob offer trenchant critiques of modern living with lyrically swart nuggets like "Look! A Dollar!" "Brain in Vain," and "Pissing on a Panda." Their debut, Sweden We Got a Problem (Bad Taste), may well be the 21st century answer to the perennial query, "Are we not men?" Love is All (Gothenburg) www.loveisall.tk; Elysium, Fri, 1am

Quit Your Dayjob (Malmö) www.quityourdayjob.org; The Drink, Fri, 1am