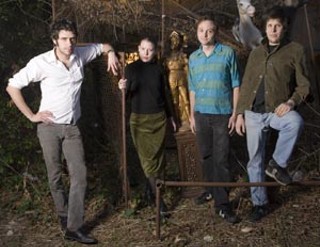 As slowly as one of their shadowy narco-roots songs unfolds, Knife in the Water has rematerialized in local venues after nearly a yearlong hiatus. Vocalist/guitarist Aaron Blount says the trouble started when Knife and their label, Aspyr (which has since shut down its music division), couldn't see eye to eye: "We had a clause in our contract that said after a year, if we weren't happy with the situation we could fire them, and we did." Almost concurrently, the quintet was in turn let go by their booking agent, and guitarist Kiki Solis shattered both heels jumping off a two-story Amsterdam building, requiring several months of rehabilitation. "We were just kind of worn down," deadpans Blount. They returned to live playing first in Dallas – "for some reason we have some weird connection with Dallas we don't with our hometown," says Blount – then in Austin, exploring more acoustic-, jazz-, and country-based palettes. (Try the wispy cover of Johnny Cash's "The Man Comes Around" on their MySpace page.) "We're trying a bunch of different directions right now," says Blount. "We want to be able to work on anything." See what that might be at Beerland's 7pm happy hour Friday and Feb. 24's Sweatbox benefit at Emo's. 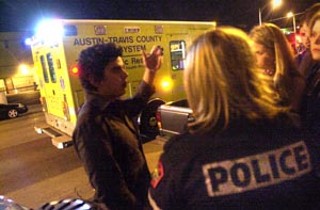 A man who asked not to be identified gives details to a police officer after he and his friend were attacked half a block from the intersection of Seventh and Red River last Friday night. (Photo By John Anderson)

Since the beginning of the year, near-daily reports of auto break-ins, equipment thefts, and even stabbings and shootings have eclipsed even band gossip as Red River's No. 1 topic of conversation. As this picture shows, trouble isn't exactly hard to find downtown, and most people TCB has queried recently say crime is starkly more prevalent than in the past. Several have been affected personally, and almost to a person, they trace it back to last fall's influx of hurricane evacuees. "I think people were more freaked out and overreacting than there was anything happening when [evacuees] first got here," says Room 710 doorman Joe Sebastian. "People's perceptions made it worse, but there were certainly a few things that happened right after that." Including his own car being burglarized. "That's the first time it's been broken into in 11 years working downtown," Sebastian admits. "I was probably just overdue." With the Salvation Army and ARCH nearby, Red River has long been local transients' gathering spot of choice, and even their world has been upended by the storms' fallout. "Our regular street people, our Huggy Bears, were missing for a couple of weeks there," says Emo's manager Bill Corsello. "The über-thugs who rolled in from the hurricanes scared some of them away." Compounding matters, some believe the Austin Police Department's recent string of well-publicized minority beatings, Tasings, and deaths have made police reluctant to enter situations that could add to the list. "Cops' hands are tied," Corsello says. "It's a real conundrum." (TCB contacted APD for their perspective, and will continue to do so.) Another theory exists, that the recent crime wave is just one more set of growing pains as Austin becomes a real big city at last. "Maybe it's just our quiet, safe little hamlet is growing up," says Corsello. 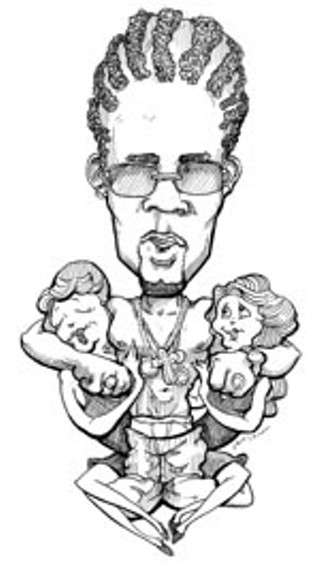 It sure didn't take long for Sylvester, Cathy, Chuck, Rufus, Bridget, Big Man, and the rest of R. Kelly's Trapped in the Closet crew to enter modern mythology. Their spouse-swapping saga is even broken down into CliffsNotes at www.somethingawful.com/articles.php?a=3100. But what might Kelly, sexing up Bass Concert Hall on St. Patrick's Day, do for an encore? TCB's exclusive look at chapters 13-18:

CHAPTER 13: Sylvester, a promoter, meets with Paje (Kanye West), owner of Chicago's most popular nightclub. Mobsters burst in to confront Paje over missing prostitution receipts, and Sylvester is quickly back in the closet.

CHAPTER 14: Chuck and Rufus move to Toronto. The hoods unload several boxes of bootleg baseball cards on Paje. While they rough him up, Sylvester slips out of the closet and grabs a box.

CHAPTER 15: Cathy and Mrs. Chuck, who get their hair did at the same Southside salon as several White Sox spouses, have their awkward reunion interrupted when Wayne Gretzky's wife shows up to take bets on the Olympics and NBA All-Star Game.

CHAPTER 17: Murray, Corgan, and Tweedy donate the cards to the Baseball Hall of Fame as a tax write-off, and get invitedto the White House. They invite Sylvester and Twan along as security; James the Cop joins them after Bridget reconciles with Big Man and elopes to Mexico. 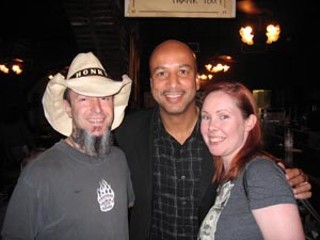 Like sands in the hourglass, so go the days until SXSW. Several readers have already written to inquire when wristbands might be available, and the answer is, you'll know as soon as we do. Word is the record number of registrants has made organizers wary about how much plastic to release, but the big names keep on coming: this week it's the Beastie Boys, who'll be interviewed at the Convention Center March 15 while premiering fan-filmed live doc Awesome! I F*ckin' Shot That! Meanwhile comes that announcement that Lollapalooza, produced locally by Charles Attal and CSE, will expand to full ACL Festival scale in Chicago's Grant Park Aug. 4-6: three days, 120-plus bands, and record high temperatures. (Just kidding?)

How does someone in a Honky hat get a picture with "Chocolate City" Mayor C. Ray Nagin? Easy. After Honky's recent show at New Orleans' One Eyed Jack's, bassist Jeff Pinkus and girlfriend Karen Raymond were toasting her birthday at nearby eatery Mesparo's when Nagin came in for takeout. "He was all about wishing me a happy birthday," Raymond says.