For the sake of the song: Folk Alliance 2006

Music associations around the world haven't yet overtaken the global tide of singer-songwriters as far as sheer numbers, but it's close. Polka, choral, electronic; for any and every genre or subgenre you can think of there's someone out there trying to find an audience for it. Nashville's Country Music Association is probably the best known, but Austinites are likely familiar with Memphis' Blues Foundation and the SXSW-born Americana Music Association simply because of the popularity of those musical genres in this part of the world.

Unless you're an active participant in the music business, it's unlikely you've heard of the Folk Alliance until recently. This weekend its annual conference invades Austin's downtown Hilton Hotel for four days of panels, films, workshops, exhibits, etc., and more music than you can possibly imagine. At the conference in Nashville three years ago, the amount of music was simply overwhelming. Think SXSW compressed into a single hotel. Austin, being a similar haven for singers and songwriters of all stripes, should be just as dizzying when the Folk Alliance rolls into River City.

Technically, the association's formal title is the North American Folk Music and Dance Alliance. Founded in 1989, it's a nonprofit with approximately 2,000 members and an annual budget of around $800,000. Increasing "access to needed resources for members and expand[ing] the breadth of the folk music and dance experience for the general public" is its mission statement, and in accomplishing this, the Alliance provides year-round services, including a music-business directory, newsletters, classes, workshops and regional events, and arts advocacy on a regional and international basis.

Judging by the 2003 conference in Nashville, this week's affair will scream "grassroots." Unlike the exhibit area at some conferences where major corporations have booths that resemble spacecrafts, it's likely there will be some folks at the Hilton whose setup is obviously homemade. It won't be unusual to see a string band set up in a hallway and draw an appreciative crowd, and watch out for the guy with a guitar in the elevator playing to a captive audience. Daytime events feature panels discussing all sorts of business concerns, with an emphasis on educating the newbie.

Mark Moss, one of the founders of Folk Alliance, is also the editor of Sing Out! magazine out of Bethlehem, Pa., and current FA treasurer. He acknowledges that the organization has grown in fits and starts over the years, but also promises that "everyone that comes to the event will leave with something tangible." Austin's Slaid Cleaves, who won't be performing this week, backs him up.

"The first couple I went to weren't worth it," says the local songwriter. "But right after Broke Down came out [2000], I was seen by talent bookers, and it led to an invitation to the Newport Folk Festival."

Songwriter Jenny Reynolds, a sweet-voiced neo-folkie who's still relatively new to Austin, says she met some folks from Kerrville, the other famous folk festival, at Folk Alliance meetings, and that eventually led to her leaving Boston and relocating in Texas. "A lot of it has a dog-and-pony-show feeling to it, or more like running a marathon in a phone booth," Reynolds asserts. "But if you go in with a plan and have reasonable goals, it'll work for you. It's not the only tool to further a career, but it's a good one."

David Hamburger, an accomplished Dobro and guitar player with one of Austin's best new bluegrass bands, the Grassy Knoll Boys, also moved here from the Northeast, and credits a Folk Alliance conference he attended in the past with introducing him to a lot of musicians he ended up either recording with or joining as a sideman. Veteran Austinite Kerry Polk, an acclaimed if underappreciated folk/roots artist, points out that "the educational aspect of it is good for a newcomer, and it's rare to have access to so many business people in one place."

Tom Pittman of the Austin Lounge Lizards, whose band will be playing, sees another side, however. "Any of the conventions are not that good for established artists," he maintains, "simply because it's expensive to put a band on the road while taking away from a weekend of paid gigs."

Another music conference veteran who's felt the positive effects of the Folk Alliance is Louis Jay Meyers, who left Austin in the summer of 2005 for Memphis, where he's now the group's executive director. One of the four founders of SXSW, Meyers brings some unique experience to the position, including being a banjo player. He's also shaken things up already. In the past and including this year, the conference has moved from city to city, but beginning in 2007 it will have a permanent home in Memphis. Meyers has also altered the showcase setup.

"This is a transition year," he says. "The last 18 years, there was one showcase a night. This is the first year there are multistage juried showcases with 220 acts over four nights on two floors of the hotel."

That may not sound like much music, yet what have come to be known as "guerrilla showcases" balloon the event exponentially. A bit of searching on the Internet will turn up a spreadsheet (www.victorheyman.com/fa06%20tables.htm) of more than 2,400 scheduled performances in rooms and suites throughout the Hilton over the course of the long weekend, noon to 3am each day. These are put on by just about anyone with an interest in the music, and the fact that the genre on display is largely acoustic-based and requires little if any setup allows for almost no downtime between sets. Acts play multiple times over the weekend, of course; Polk has six showcases planned, while Stacey Earle, better known but not an official showcase performer, is scheduled to play four times.

One of the biggest obstacles facing the Folk Alliance is the opinion some people have about music itself. The official showcases prove the breadth of what it can be by including everyone from Judy Collins, Arlo Guthrie, and Marshall Crenshaw to Celtic fiddle bands from Scotland, Cajun bands from Louisiana, a harp and percussion group from South America, and local bluegrass and gospel acts.

Moss, who will be moderating a panel titled "What Is Folk Music?," views the genre as "a big umbrella that includes traditional and contemporary sounds. It's music that relates to community and roots." He notes that there will be a marketing campaign this fall, the first time the Alliance has tried anything like it, with the slogan "Folk – No Boundaries."

Dan Hays, executive director of the International Bluegrass Music Association, has experience with successfully marketing a musical genre. The IBMA has demonstrated tremendous growth over the past decade, so much that they relocated their offices to Nashville from Louisville, Ky. Their business convention has evolved into a weeklong event in October that includes Fan Fest, an indoor festival putting the genre's top acts in the same space as their adoring public, as well as a nationally broadcasted awards show. IBMA reported nearly 23,000 registered attendees for Music City events in 2005. The radio broadcast saw an 18% increase in affiliates, bringing that number to more than 390 stations, the most ever.

"We're very interested in the economics, but it revolves around the music," Hays explains. "It's also a unique period in the music, where there's a combination of new artists and musical pioneers that can bring in a new audience." His attendance at Folk Alliance led Hays to the conclusion that "it's a fellowship. Through the heightened focus on music I've built some good relationships."

With the theme of the weekend being "For the Sake of the Song," one of the highlights of Folk Alliance will be the screening of Be Here to Love Me, the wonderful film about Townes Van Zandt with director Maggie Brown and producer/Chronicle editor Louis Black in attendance. Another marquee event takes place on Monday night, when Arlo Guthrie brings his highly touted Ridin' on the City of New Orleans tour to the event. Open to the public (see sidebar), it benefits hurricane victims and features more than 70 performers from around the world. 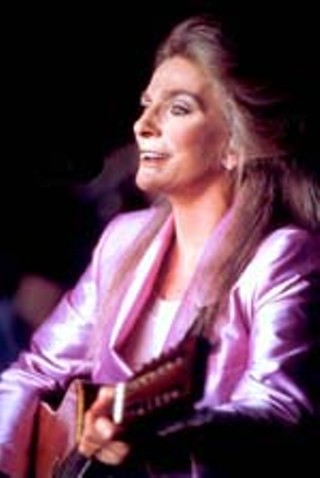 Folk's detractors will find themselves tested this weekend. Attendance at just one or two of the events will prove that it's not all navel gazing singer-songwriters and/or a bunch of old hippies sitting in a circle singing "Kumbaya." Rather, Folk Alliance fosters a welcoming community filled with lively people with a passion for music of fascinating depth and seemingly limitless variety.

Registration isn't required for some of the events at the hotel, although a separate admission fee might apply.

Information on the entire conference can be found at: www.folkalliance.net/conference/index.php

If you're just interested in the official performance schedule look here: www.folkalliance.net/news/details.php?nid=25

A spreadsheet for the "guerilla showcases" can be downloaded here: www.victorheyman.com/fa06%20tables.htm