The Sword's land of ice and snow 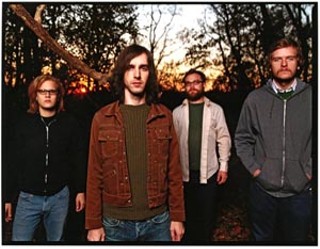 Metal is about imagery, the warrior, the virgin, the beast, the secret handshake that binds the mystical to the big riff. This dark vision of the past, this obsession with mythology and the epic battle that's hellbent for leather and personified by thundering drums, marks the oeuvre like a numeric birthmark hidden under the hairline.

Black Sabbath, Motörhead, Iron Maiden, Metallica; it's an image that still frightens parents and guardians while altering the minds of teenagers immersed in dog-eared issues of Heavy Metal magazine and Led Zeppelin IV. Yet the decibels, the marching guitars, and throat-shredding bellows remain paramount, having long ago spawned some kind of monster. They birthed bands like Austin's Sword, whose debut full-length, Age of Winters, was conceived in a sweaty Heavy Metal haze.

"It was a big influence on me as a teenager," admits singer/guitarist JD Cronise. "I still read an issue every now and then, but like so many things, it just ain't what it used to be."

Neither is metal. We all know what happened to many of those bands as they veered toward the heady hair-metal days; one day the pyrotechnics guy just didn't show up. Such is the nature of evolution. This time last year, Cronise, guitarist Kyle Shutt, bassist Bryan Richie, and drummer Trivett Wingo were rocking shorter 'dos here in River City. Now, the locks are longer, facial hair more abundant. It's only natural: the Sword's slab of sound embraces that, hearkening back to metal's fat grooves and Thin Lizzys, the fantastical and the mammoth. In such company, nothing beats a killer 'stache.

Acts as spectrally diverse as Mastodon and Coheed and Cambria have taken up that imagery, transforming it into a literary endeavor. Age of Winters descends on Valentine's Day and the buzz has already infected the blood of innocents. The album's guttural guitars and Cronise's overlord vocals carry the story of gory battles and horned goddesses over a seismic rhythm section. The titular imagery is also there, of course; the Sword's handle bows to metal's warfare-obsessed history. On the quartet's Web site is an essay on swordsmanship; press photos picture the band wielding the weapon. The riffage is also there, just as sharp. The blade goes deep. Their sound isn't deafening, however, and when labels came calling, the band didn't jump on the first offer.

"We were talking to Kemado before South by Southwest," says Wingo of Winters' NYC label sponsor. "There was also Tee Pee, Arclight, Relapse."

They stuck with Kemado, whose roster includes psych-Swedes Dungen and the classic-rock kitsch of Diamond Nights. They did so because it was "a sweet deal," reveals Richie. "They don't sign a lot of bands, and they put a lot into the bands they choose to invest in."

"There's really no band on the label we're competing with, being a metal act," adds Shutt.

Already, the Sword has been blurbed in Billboard as a "Band to Watch," reviewed by David Fricke in Rolling Stone, and featured on MTV.com. Someone's even selling their press kit on eBay for $30. Not bad for an act forged just two years ago. Cronise and Wingo knew each other from Virginia, playing together in a band called Ultimate Dragons. Shutt and Richie, meanwhile, were veterans of Texas bands united by a love of Zeppelin. Over the course of their initial live forays, the foursome fine-tuned the songs that eventually made up Winters, revising them ever so slightly over periods of time. After a spring tour with Trail of Dead and the Octopus Project, they got to work in earnest, and by summer were circulating a three-song demo as their rough draft. In October of last year, the band began recording the album at Folkvang, Richie's home studio.

"Doing it at my house, we were able to tweak it a million times," he says. "We were a little worried that [the label] might not accept it, being that I didn't go to school for that. I don't have thousand-dollar equipment."

Cronise produced the album, Richie engineered it, and Wingo is currently the Sword's manager. They recently finished filming a video for "Winter's Wolves" in Staten Island. While the band won't divulge the fantastical plot in store, they confirm that the sun-up-to-sundown shoot was cold, "grueling, and brutal." The day of principal photography, the forecasted snow froze everything over.

"It was exactly what we wanted," Shutt laughs.

Richie takes it a step further: "Odin was on our side."

You don't have to be Norway's chief divinity to hear Winters as a highly literate endeavor. While Robert Plant preached of Valhalla bound to Greek and Celtic folk and Sabbath moaned of the apocalypse and "atomic rage," the Sword's vision falls somewhere in between, even quoting William Butler Yeats in the liner notes. Razor-sharp prose like "Twilight written in the runes of crones" and the barked alliteration of "Harken to the howl of the huntsman's hounds" fill the purist's notion of the metal tradition. The Sword's just reshaping the mold.

"Some are metaphorical, some are allegorical, and some are just fantasy," Cronise explains of his lyrics. "I'm very interested in mythology and folklore; Age of Winters draws from Norse/Germanic mythology and folklore and Arthurian legends, although there are other sources as well. There are similar references and imagery found in various songs. It's not a concept album, but it's definitely meant to have a cohesive feel."

Cronise's interest in mythology and literature stems from comic books and animé, but he credits the hammer of the gods for opening his ears. "The earliest influence is Led Zeppelin," he says. "I was into the various moods they create. I like music to provide a little more than just auditory stimulation. We still want it to be visceral, but not in an overly macho, testosterone-fueled way."

Visceral is one way to describe the Sword's live shows, which have become a lesson in the primitive. Over the last year, packed shows at Emo's and Room 710 have made the battle scars of Cronise's lyrics seem real. It's an assault slow and calculated, sweat mixed with black, charred riffs creating a narcotic spell, amps piled high like weapons. Divide and conquer, then an ascent unto the right hand of some faceless god holding a giant bong of truth.

Perhaps Yeats was the first metalhead: "And while we're in our laughing, weeping fit, hurl helmets, crowns, and swords into the pit."

We are all slaves to the almighty riff.

The Sword celebrate the Age of Winters Saturday, Feb. 11, at Emo's.