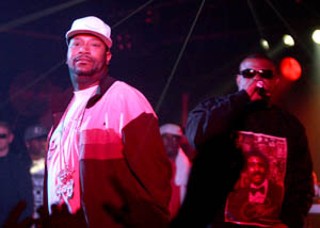 Anticipation heightened late Sunday evening as armchair quarterbacks wagered on whether the newly-paroled Pimp C would be joining his UGK counterpart Bun B at the Back Room. Ultimately, Houston's stately rapper (pictured left) went it alone, focusing on his 2005 solo debut, Trill. Bun's 30-minute set drew from a full stable of Pimp C-produced classics, including "Pocket Full of Stones," "Front, Back and Side to Side," and "Let Me See It." The performance also highlighted Bun's knack for impeccable guest verses as he ran through his contributions to Jay-Z's "Big Pimpin'," Three 6 Mafia's "Sippin' on Some Syrup," Webbie's "Give Me That," and Young Jeezy's "Trap or Die," then dropped "Get Throwed" along with the Salih Williams-produced "Draped Up" from his solo disc. Closing with a promise, "When I come back, I'm gonna bring Pimp C with me," Bun B knew exactly how to feed fans just enough to leave them fiending for more. Spending hours on end waiting for a headlining act to go on, only to be met with an all-too-abrupt show (all too standard for the genre), will rub unexperienced hip-hop patrons the wrong way, but at least the DJs filled in by playing such mesmerizing local jams as Casino & Gutta Gang's "Gametime." In a zone of its own devices, Texas rap continues to flourish by doing what it does best, balling out of control.