Emo's string of free shows every January, ballooning to nine days in 2006, is many things: the new year's musical starting line, Austinites' not-so-dry run on SXSW, and the evolutionary local cycle in action. Consider that Rubberhed, Ignorance Park, This Microwave World, and Young Heart Attack were all top draws at Free Week 2005, but long gone by last week. It might remind those of a certain age of the days when Emo's was always free, but local music was also a much less valued commodity. (Saturday night, the club reached capacity, inside and out, by 10:30pm.) Free Week is the scene in miniature, with a few important exceptions. Most importantly, by its nature, it exposes audiences to bands they might never pay cover to see: For every convert the Glass Family made Saturday night, someone else swore Zykos would never invade their eardrums again. Which prompts a question seldom asked in Austin's myopic music scene. Yes, we have a lot of bands here, but how many are actually any good? Of the whopping 48 bands taking the stage during Free Week, simple math dicates that they can't all be What Made Milwaukee Famous. Or Gorch Fock. Or America Is Waiting. Or can they? (Two TCB favorites: 'Til We're Blue or Destroy's bizarre roots-rock/power-pop double-tracking; the Lemurs' hypnotic post-punk sleight of hand.) Perhaps the real genius of Free Week, in a scene as crowded as ours, isn't hipping the uninitiated to acts they like. It's allowing them to discover which ones they don't.

Now in its 20th year, SXSW is again poised to set record numbers of artists both invited and accepted. So, naturally, they're going to need more volunteers than ever. First call is 2:30pm Sunday, Jan. 22, at the Hilton downtown. These are some of the locals that made the SXSW 06 cut so far. See the hundreds and hundreds of others who did as well at www.sxsw.com.

Stop the Truck and Mau Mau Chaplains guitarist Steve Carter, a longtime Austinite who served with the Lotions and Pressure, recently needed surgery for a detached retina, so his friends are throwing him a benefit Sunday at the Flamingo Cantina. The Ceasar Bros. Funkbox, with special guest Cyril Neville, tops the bill, with Sonny Throckmorton, Freddy Powers, Jon Emery, Floyd Domino, Albert & Gage, Sara Hickman, and more joining in. Doors at 5:30pm, with a silent auction. 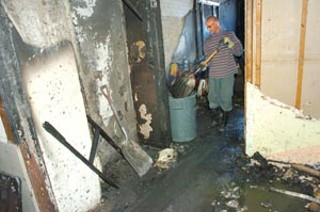 Sweatbox Sweats One Out

"Sweatbox is burning," announced Attack in(Formation)'s Ben Webster from the makeshift stage last Thursday, interrupting Free Week with the worst possible news. Those assembled on Emo's patio could already smell the tell-tale aroma, and several ran immediately to the nearby building at 304 E. Fifth to see for themselves. It was indeed burning, badly, but no one knew where: besides the 12-year-old Sweatbox, the building houses art and dance studios, music rehearsal spaces, and KOOP radio's studio and offices. The Austin Fire Department said Friday the fire was started by "improperly discarded smoking materials" and was largely contained to the second floor, away from both KOOP and Sweatbox. Both businesses sustained peripheral smoke damage, however, and may be forced to move anyway because the damage may put the building out of commission permanently. The electrical system was ruined, and Sweatbox engineer Bryan Nelson said Tuesday he didn't know whether the owners would put in a new one. (TCB was unable to contact owners the San Jacinto Group.) KOOP expected to be back on the air Wednesday, possibly through an arrangement with KVRX, and on Monday was waiting to see how much of their music library was salvageable. "We do have one of those rare, sick music collections," said the station's Rebecca Gutierrez. Sweatbox owner Mike Vasquez has transferred operations to the Nevele Eleven Studios down South (site of the original Bubble, off Slaughter Lane), but Nelson isn't quite ready to write the original location off yet. "If it's a matter of cost to restore the building, we have tons of free manpower, and we know everybody," he says.

It's time to vote in the 2005-06 Austin Music Poll, on p.57 of this issue and at austinchronicle.com, and as always TCB has a few kindly suggestions. Just remember, vote too enthusiastically and your favorite band may get disqualified. "Stuffing is really obvious, and computer ballots have made it even easier to track," says the redoubtable Poll Answer Lady. "Really easy." Voting continues through Jan. 26.

AUSTIN BAND OF THE YEAR: Spoon

ROCK: ... And You Will Know Us by the Trail of Dead

NONE OF THE ABOVE: White Ghost Shivers

RECORD STORE: End of an Ear