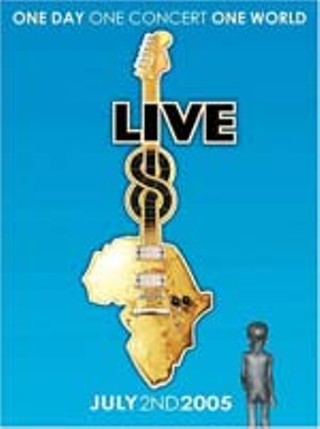 Live 8, it seems, is about irony. For example, there's Sir Bob Geldof onstage in London lambasting the cynicism of G8 leaders' attitude toward Africa, then trotting out Birhan Woldu, the African girl who was snatched from the jaws of death thanks to the largesse of Live Aid 20 years ago. Madonna smothers the girl in kisses, then drags her around onstage while singing "Like a Prayer." If this is a political event to end poverty in Africa, why is singer Vusi Mahlasela the only representative from the African arm of the concert to make it onto this 4-DVD set? This is particularly ironic given the powerfully resonant image from disc two of Paris Hilton, the bloated face of Western privilege, singing smugly along to Velvet Revolver in London. This celebrity-endorsed event is chockablock with so many self-righteous moments as to be both excruciating and embarrassing, especially a montage featuring white-clad celebrities snapping their fingers every three seconds to indicate the death of another impoverished African child. Fucking drama queens. Musically speaking, the first two discs are moderately interesting, with strong performances by Coldplay, U2, and R.E.M., but things really pick up on the third disc, with scorching performances by Stevie Wonder, the Who, and Pink Floyd in the reunion no one thought would ever happen. The dreamy rendition of "Speak to Me," nearly note-perfect "Money," earnest "Wish You Were Here," and awesome "Comfortably Numb" make this a worthwhile musical document. The tagline for Live 8 is "2 million spectators, 3 billion viewers." Despite G8 canceling debt for 18 countries and pledging staggering amounts of aid (both financial and pharmaceutical), all this irony won't exactly inspire you to stop watching and start acting.