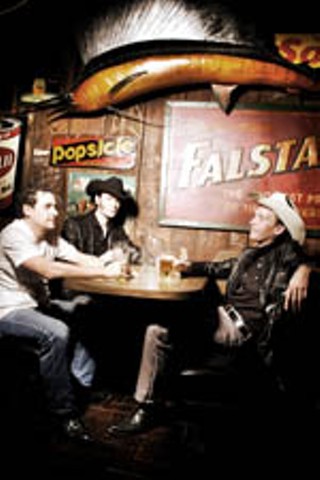 When R.L. Burnside passed away Sept. 1, another chapter of music history died with him. Widely credited with introducing Delta blues to generation ADD, Burnside's influence was both more subtle but more pervasive; he poured his Ass Pocket of Whiskey on everyone from old-school bluesmen to indie and punk rockers.

Six weeks after Burnside's death, Austin's Red River element crowded onstage at Beerland to play tribute to the 79-year-old Mississippi bluesman. This wasn't Stevie Ray's crowd. It was the new blues school: Possessed by Paul James, Scott H. Biram, Walter Daniels, and the raw rock & roll blues of local trio Chili Cold Blood. What began as an evening of short sets interspersed with Burnside tunes became an all-out jam, because that's the way these things should be done.

"Everybody who's in this scene is doing it because they love this music," explains Chili Cold Blood pedal steel player Ethan Shaw. "Everybody's realistic about how big of an audience we're ever going to reach. But there are a lot of people who really dig it, and that's awesome."

Chili Cold Blood is anything but typical. Shaw's pedal steel is played like a slide, adding some psychosis to the act's gutbucket blues. Doug Strahan trades vocal duties with Shaw, his vocals stretched and splayed through a treated mic. Fingerpicking like the blues greats – thumb included – Strahan's lanky figure nods to the beat, his cowboy hat tipping with each measure. The newest member of the band, Matt Puryear, is the glue that brought CCB out of obscurity. His disco beats erase any need for bass.

The sound is razor-blade, roller-coaster, boot-stompin' ecstasy. The freedom of rock & roll, discipline of country, and passion of blues; the best elements of all three genres liquefy into one powerhouse set. When Strahan starts picking a free-flow solo and Shaw's steel flies back and forth like an air hockey puck, a brand-new history lesson is being written at 100 mph.

Chili Cold Blood has been playing the Poodle Dog Lounge on Burnet every other Saturday for nearly three years. This is their playground. Four-hour sets of trials and standards have replaced practices and rehearsals. At the longtime dive, Strahan and Shaw's guitar amps scream inches away from their fans' noses. What better way to hone your skills?

All three started playing music seriously as sidemen in country bands: Shaw on upright bass, Strahan on guitar, and Puryear on drums. Those years taught them how to read their fellow musicians' thoughts during the first few song notes as opposed to relying on verbal direction. Other cues come courtesy of Johnny Cash, John Lee Hooker, and even Black Sabbath.

"In a lot of ways, the Rolling Stones were influenced by the same influences we are," asserts Strahan. "So it makes a lot of sense: a lot of country, a lot of blues, and angry young men who wanted to get laid."

"We have such a solid foundation that we're not afraid to push the envelope in different directions than we have before," adds Shaw.

In fact, Chili Cold Blood has become impossible to pigeonhole. When Puryear joined the band last year, he took elements from Burnside's grandson and drummer, Cedric, and added them to the CCB mélange.

"The disco beat incorporated with the blues groove is awesome," Puryear exclaims. "It feels good. It's something that comes from the drummer not having a bass player to follow in the band. There's more area to fill in there."

"That's where a lot of modern blues bands shoot themselves in the foot," responds Shaw. "They feel like they can only play three grooves: a shuffle, a slow blues, or a funky blues. That's why we don't ever want anyone to think of us as a blues band. We're definitely not. All these different genres of music came out of the same place. Back in the day, Jimmie Rodgers and Louie Armstrong were playing on recordings together, so what do you call that music?"

Just after Katrina hit New Orleans, CCB took off on their annual band-bonding road trip. Since the Big Easy was their first choice before the hurricane hit, plans were diverted to Memphis, where Burnside saw his final days, where Elvis made his home, and where STAX Records became a national phenomenon. In the halls of the STAX Museum are photos of Booker T & the MGs backing almost every band that came through the doors. That's what Chili Cold Blood is aiming for: not one band, but a community of musicians helping one another reach the pinnacle of their talents.

In that pursuit, they've founded Bloodchili Records along with Rob Story, the man behind all the controversial album covers and poster art for the black & blues threepiece. Due out soon is another record by harpsman Walter Daniels ("Howlin' Wolf Does Not Wear Panties"), as well as their honky-tonk buddies, with Puryear on the kit, Lucas Hudgins & the 1st Cousins, and CCB country alter ego the Moonhangers, who play at Eastside joint Red's Scoot Inn every Wednesday. Bloodchili is the vehicle that binds these acts together. It's not a business endeavor, per se. It's more of a handshake boost, an Austin STAX for the 21st century.

In the meantime, between playing with the Moonhangers, putting out their friends' albums, and writing new material, Chili Cold Blood will keep on rockin', sans bass and with attitude.

"It started way back," Strahan explains. "I imagine a lot of early groups just couldn't afford to put a full band together, so they would just go on with what they had. When [John Lee Hooker] had a bass, it just sounded goofy."

"When you have a bass, you have to stick to the form of a song," adds Shaw. "Part of what Chili Cold Blood is all about is being able to change it around whenever we want."

"And it just sounds so raw without one," grins Strahan. "You can still have a lot of rhythm, enough for everybody, without a bass."

All that rhythm, all that jive, comes from Puryear's tight-ass drumming.

"I can find that frequency with just a kick drum and a floor tom when it's called for," he says. "When these guys get busy, if I just can maintain, as long as I'm not getting flashy and busy, it's going to come across pretty grooving and cool. The basis of the band is the groove. We're all about getting into the groove of things."

The Fuck You Up Man

With the release of Rock 'n' Roll Motherfucker Redux, the re-recorded version of CCB's out-of-print 2004 debut, this time with Puryear on drums, comes a slew of opportunity. They recut the album after Italy's Shake Your Ass Records – also home to local acts Walter Daniels & Wade Driver, This Damn Town, and Black Joe Lewis & the Cool Breeze – begged them to put out a 7-inch overseas. After a two-hour recording session, the boys sent the material, and to their surprise, Shake Your Ass loved every second of it. They picked up a couple of tracks ("Why Baby Why" b/w "Slow Down") for the 7-inch and also released the LP in Europe.

As they gain popularity overseas, they stay at home here. With all three guys pushing 30 and holding down full-time jobs and significant others, touring hasn't been a high priority.

"We've all been in bands before, and we've all done a lot of touring," Shaw expresses. "A lot of bands go on tour because it's fun to go out. For us, we're all at a point where we don't necessarily want to be getting crabs from sleeping on the floor of some house."

Can you blame them? Fingers are crossed for a European tour sometime in the future, but the horizon is clear of vans and suitcases.

Earlier this year, CCB released Jesus Comin' ... I'm the Fuck You Up Man, their second disc and first on Bloodchili. With every release, that "sharp like a razor, steady like a train" sound (thank Reese Witherspoon's June Carter for that one) owns them more. Like June's Johnny Cash, CCB's songs tell stories of what might be, not necessarily what is. Everyone needs a fuck-you-up man, whether or not he's readily available.

The boys will continue playing their bimonthly Poodle Dog gigs, as well as ever-more-frequent Beerland, Continental Club, and Hole in the Wall shows, and they'll keep putting out LPs (a new one is scheduled for recording in February) that they want to listen to regardless of what's popular at the moment. What it really comes down to, however, is Austin's gutbucket community. Without fans, Chili Cold Blood is nothing, and Ethan Shaw and his boys know it.