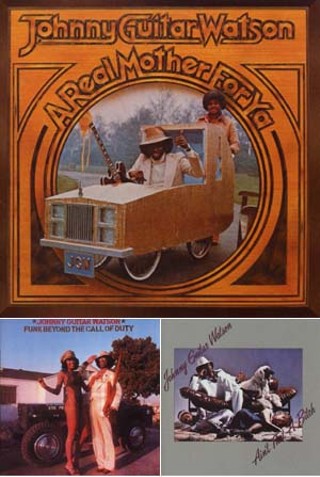 Ain't That a Bitch (Shout! Factory)

A Real Mother for Ya (Shout! Factory)

Funk Beyond the Call of Duty (Shout! Factory)

Of the plethora of Texas blues guitar slingers who migrated to L.A. during the Fifties, Johnny Guitar Watson was the slickest of them all. Not surprisingly, the Houston-born "Gangster of Love" was therefore the only one to successfully make the stylistic leap into Seventies funk. It was a natural extension for the street-wise Watson, who fashioned himself as a pimp-threaded funkmeister and turned out this trio of albums, 1976-77, that shot him higher up the charts than ever before. As producer, arranger, songwriter, and player of all instruments save for drums and horns, Watson put his 20-plus years of toiling in the blues trenches toward creating a sound that blended deep funk and sultry R&B with his distinctive voice and biting blues guitar licks. There was no escaping the omnipresence of disco in those years, but Watson refused to surrender to the glossy beat; rather, he worked his own variation that leaned more toward his earthy roots than Tinseltown glitter. His best work exudes a wry, almost jive, tongue-in-cheek humor that played counter to the serious groove he was laying down. While these albums all yielded radio hits, particularly with their title tracks, the first of the three, Bitch, best exemplifies the winning combination of these qualities. It also features a smoldering, soulful masterpiece with "I Want to Ta-Ta You Baby." For a sampling from this trio, plus several subsequent albums and unreleased tracks, check out The Funk Anthology, a 2-CD set guaranteed to ignite any party. Watson was the party, after all; up until the day he passed while performing onstage in Japan, 1994, Johnny Guitar Watson remained one badass dude.