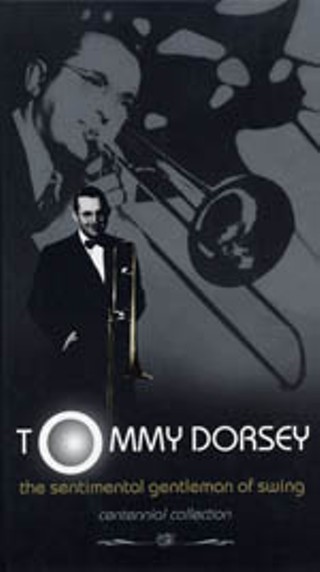 Although white bands were the most popular during the swing era, it's now recognized that African-American bands like those of Fletcher Henderson, Duke Ellington, Count Basie, and Jimmy Lunceford were the best in this genre. What's happened since this opinion has been accepted is that white big bands have often been lumped together and generally forgotten. That's unfortunate in that some were quite good, and it's still a pleasure to hear their music. Certainly this Tommy Dorsey 3-CD set is welcome. Dorsey had a fine all around band, doing flag wavers like "Marie" and ballads featuring a young Frank Sinatra. Dorsey was well-stocked with admirable soloists, including himself on trombone, Bunny Berigan and Charlie Shavers on trumpet, Johnny Mince and Buddy de Franco on clarinet, and Bud Freeman on tenor sax. In Dave Tough, Dorsey had not only a drummer who was outstanding in the Thirties, but a precursor of the be-bop style. The first disc spotlights Dorsey as a soloist, with various studio orchestras between 1925 and 1934. His improvising is notable here, but so is the work of other stars of the era, guitarist Eddie Lang, violinist Joe Venuti, and the marvelous though still underappreciated vocalist Connee Boswell. The second CD includes 1935-1955 studio sessions by his band and illustrates that Dorsey was willing to make some accommodations for changing times, as on Ernie Wilkins' modern "Flagler Drive." Air checks are featured on the third disc, including a number of vocals. The gifted Dick Haymes can be heard as well as Sinatra, and the disc ends with a 1956 Dorsey-Elvis Presley version of "Heartbreak Hotel." The set is substantive and difficult not to enjoy.