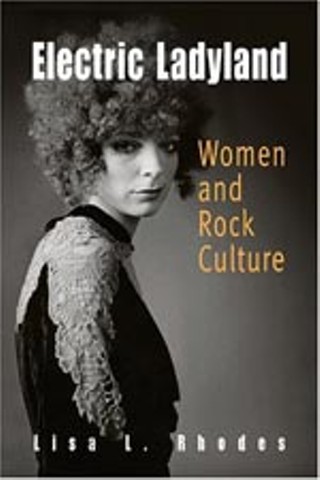 A: "Someone who writes for a national paper."

That telling exchange, posed by journalist Richard Goldstein to the Who's Keith Moon, explains as much as anything in this exhaustively researched and probing book on the perceived role of women in rock & roll during a time when conservative America still had tremendous difficulty distinguishing the sexes based on hairstyle alone. Rhodes examines the feminine mystique, such as it was, as it related (and still does) to Marshall amps and the male-dominated music industry, both onstage and off. This should be required reading for musicians of either (or, taking into account glam, neither) sex, much as Ondi Timoner's film DiG! has become a tour bus staple. Rhodes' arguments, chief among them that it was the women in and around rock that gave the genre its sex appeal beginning in the mid-Sixties, are rife with anecdotal evidence. From Janis Joplin's libidinous howl at 1967's Monterey Pop Festival, mirrored by countercultural birth-pangs ranging from the rise of FM radio, to the Stonewall riots and the pill, to the ascension of first- and second-generation groupie culture, it's the backstage history of women like Cynthia Plaster Caster, Penny Lane, and the Chronicle's Margaret Moser, who describes losing her virginity to Blue Cheer's skin-banger, that paved the way for current estrogen-rockers as diverse as Liz Phair and Courtney Love and, one hopes, beyond.