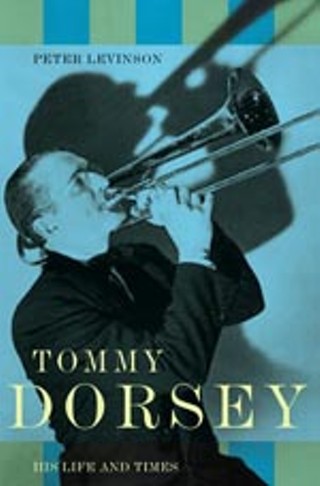 From the mid-Thirties through the mid-Forties trombonist Tommy Dorsey led one of the most popular American swing bands. Frank Sinatra became a national idol by performing with Dorsey's outfit, and when the swing era ended and rock & roll was taking over, it was Tommy and Jimmy Dorsey who introduced Elvis Presley to a national television audience. Levinson covers all aspects of Tommy's life, from his music to his ceaseless womanizing, and does a solid job. Dorsey was born to a poor coal-mining family in eastern Pennsylvania, his father switching professions to be a music teacher in middle-age. He brought out the best in his sons' playing so they didn't have to suffer in the mines as he and his neighbors did. And he was successful: By the time Tommy and Jimmy, who was two years older than Tommy and played alto sax and clarinet, were teenagers they were already accomplished performers. By 1925 both had established themselves among the elite of New York studio musicians, often working together despite vicious personal quarrels. In 1935 they split up, each becoming the leader of a popular swing band. Tommy was a strict disciplinarian and led a polished band that had produced a number of hits even before Sinatra joined them. Mainly concerned with popular success, he had a conservative musical philosophy and was known as a superb ballad player, with a smooth, warm tone and outstanding breath control. Sinatra was among many artists who learned about phrasing from him. In the Fifties, Jackie Gleason used his influence to get the Dorseys co-leading a band again on television. They were surprisingly popular, but both paid for their unhealthy lifestyles by dying before the age of 55.