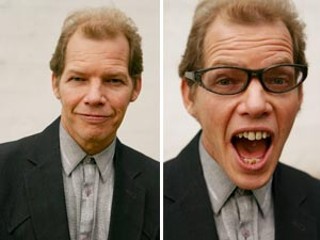 Feodor Rojankovsky's illustrations for Golden Books in the Fifties and Sixties often told a different story than the children's tale being spun. To those raised on Arthur Rackham and A.A. Milne, Rojankovsky's artwork, featuring babushka-wearing grandmothers, oddly painted furniture, and dumpling-cheeked tots in snowy backgrounds, looked decidedly, well ... Russian, Scandinavian. In a way, Erik Hokkanen's music is like Rojankovsky's art.

Sure, the strains of Stephane Grappelli imbue the longtime Austinite's violin playing, and the ghost of Django Reinhart accompanies him on the guitar, but Hokkanen can really fiddle around. Western swing? Sure thing. Vintage jazz? With pizazz. Gypsy surf? That's his turf. Yet one track on his latest release, Melodrama Sweetheart, gives it all away: "Viinijarvi Valssi" is the song he's wont to introduce live as one his Finnish grandmother inspired.

Aha! Finnish! Not the typical Scots-Irish-English background found so often with singer-songwriters, but then there's nothing typical about Erik Hokkanen. From his puckish face to his classical inflections, he's like a matryoshka, a Russian nesting doll. On the surface, he's a colorfully carved design of influences. Twist him open and there's a teenage boy rooting through his older brothers' rock & roll collection. Open again and there's a man of deep spiritual interests and beliefs. Peel apart once more and reveal an academic's love of teaching music. Pry apart to the last piece and discover his Finnish roots.

Scandinavian countries have always mirrored American music with a twist. Think Shocking Blue, ABBA, the Cardigans, Bettie Serveert, even Björk from neighboring Iceland. Yet Finland, over in its little corner near Russia, has produced its wild array of contemporary artists such as digital composer Mika Vainio, surf rockers Laika & the Cosmonauts, alt-rockers Hanoi Rocks, and the folksy chorale of Värttinä. With a dash of whimsy, Hokkanen's music touches in and around all those sounds, then soars into the atmosphere.

It's a beautiful place to be.

Erik Hokkanen appears at Magnolia Cafe on a blustery November afternoon bearing gifts of blue corn muffins and spelt bread baked in the shape of a heart. His cheeks are tinted by the brisk wind, or is it the high from his two recent recordings? With the summer release of a live CD with the Hip Replacements, his swing string band, Hokkanen followed it up with Melodrama Sweetheart, the second album he's made with the She-Wolves.

"The She-Wolves are my dream band: the Tosca string quartet with a string section," beams Hokkanen. "I'd done a previous recording with the quartet, but Melodrama Sweetheart, with the string bass and percussion, was the big band. I'd been going to see the girls play with Glover Gill down at Cedar Street and loved that stuff, another gypsy strain. 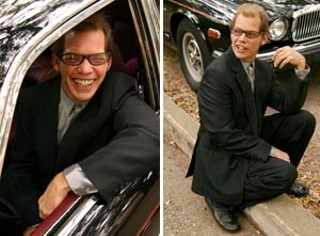 "So I got with the girls and we tried some basic arrangements. I've learned to write for twin fiddles or three instruments, so I was taking my knowledge and spreading it around. As things developed, they got more complex, a natural music progression. I was hearing things that came from further realms of inspiration. It built my composing chops. Melodrama Sweetheart is that in full force. The sincerity is in the music, all the styles."

And what styles there are! Hokkanen's quirky music has highlighted the soundtracks of numerous locally made films, including DOA, The Newton Boys, and Texas Chainsaw Massacre III. In Michael, John Travolta's rebel archangel kicks up his heels on the street to "Erik's Two-Step." No wonder he's sought as a studio sideman and toured not only the U.S., but Mexico, Europe, and Scandinavia with other groups as well as on his own.

Being part of a band, however, has its drawbacks, especially in a town such as Austin, where country and blues dominate, singer-songwriters sit in the spotlight, and instrumentalists often take the back seat.

"I ain't giving Dale Watson any problems," Erik acknowledges of the instrumentalist's plight, "but I know I'm unique. I was hired on to be a staff fiddler for the Kerrville Festival. We'd go to Houston, Dallas, San Antonio for some of those preshows, teasers. I'd back up songwriters then get featured on a tune, but the songwriters would get to do three tunes and the instrumentalists one. I remember feeling perturbed at the idea that the song was the thing. Tell Django that.

"Let's face it, when you hear someone sing, 'I wanna tell you a story ...' Boom! It's so easily digested. It's easy on the ears, and people are disposed to vocals. One reason I didn't go to Nashville was that I didn't want to be one of the boys in the band dressed in a purple suit and standing off on the side while the country star did their thing. I think it started with Frank Sinatra, when the bobby-soxers went crazy over him. He's the one who went from being in a band with a vocalist to a star vocalist with a band. By the time Elvis came along, the star was up front and the boys were in the back.

"I really enjoyed the swing-band, big-band style, where everyone's a wild man. 'Wow, look at Count Basie's soloist Lester Young! Benny Goodman's got Cootie Williams and Charlie Christian! Duke Ellington has Johnny Hodges!' They were the instrumentalists, and they were the stars on the ball team. Rock & roll in spats.

"There are a lot of fine songwriters. When I did Kerrville, I met many good writers. It's okay if you're Hank Williams, John Lennon, or Richard Thompson, but I feel that playing well and singing is your musicianship. Of course, there's showmanship and persona and charisma, and that'll sell as fast as gun smoke."

Imprint in the Blood

Since moving to Austin from Florida in the mid-Eighties, Hokkanen's played with a variety of acts around town. Junior Brown and Don Walser sought his talents early on, and he's taught at the Natural Ear Music Camp for kids. He teamed with fellow Scandinavian Erik Moll as Erik & Erik, and with the Bad Livers' Mark Rubin and Danny Barnes for the Mad Cat Trio. Lumisudet, Finnish for the Snow Wolves, are a quartet of native players he performs with overseas, their name inspiring the She-Wolves. He's released more than a dozen albums, including Erik and the Offbeats in 1987, Erik & Erik in 1992, Kaustinen Texas (with Lumisudet) in 1995, Swing the Night Away in 1996, and Mad Cat Trio, released in 1998. 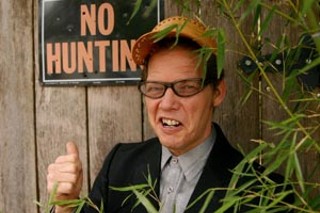 A trip to Finland in 1987 first opened his ears to integrating Finnish music with the patchwork American styles he'd mastered, beginning a series of journeys there that continues today. His roots played a major role in his upbringing ("Mom and dad grew up in Finnish Harlem in New York City and met dancing at Finn Hall"), and he listens to the stirrings of his heart.

"There's a lot to the ethnic thing. It's in the blood. There's that whole ancestral history, like your tribe. If you reawaken that, all of a sudden you're doing clog dances you didn't know how to pronounce.

"The Finnish language is not Germanic. It has roots in Asian-Hungarian. I'm just mad about gypsy and those other roots. Finland is known for sad waltzes in folk music. It's the northern tribes' version of the Appalachian murder or love ballad. It's that folk tradition of the troubadour tells the story. I got into it through gypsy swing. That gypsy strain is universal. Born out of the land."

Love Affair With the Earth Mother

During a trip to Finland in 1998, Hokkanen was made a professor of music in the Folk Music Department at Sibelius Academy in Helsinki. That trip saw a second recording with Lumisudet, the evocatively titled In the Heart of a Waking Dream. His longtime awareness of native influences was acute by 2000, and he continued studies into the culture of Native Americans.

"I was living out in the woods in Dripping Springs at a buddy of mine's cabin. I was running around in the woods doing Native American stuff, learning skills, basically having a love affair with the Earth mother.

"Finns always have a country place to go, and we had a cabin when I was young, an hour north of Orlando. My brother loved British folk rock, like Fairport Convention, and went on to write an electric mandolin book with Richard Thompson. When I was 18, Richard came to Florida and spent a week with us in the woods. I think it was around Shoot Out the Lights. They went fishing, and he caught a bass. That's what we had for supper.

"One night we played all night, jamming up in the woods. Richard brought his guitars and showed me some licks. He used to tell me, 'Erik, you've got some good things going on there.' At the end, I thanked him, and his exit line was, 'We'll have more fun tomorrow.'"

That cabin in the wilderness near Dripping Springs fed Hokkanen's soul and provided the perfect setting for what became Melodrama Sweetheart. Tucking his Finnish roots inside a teacher's heart, wrapping them in spiritual awareness coated in a love for music, there sits Erik Hokkanen, matryoshka.

"I was sitting in the cabin with blank music paper. This was before the girls in Tosca went on tour with David Byrne and we were playing Tuesdays at Flipnotics. I worked for months with a basic repertoire, and we played a lot during that time. Then I'd go back to the woods and just write and write and I felt it, the spirit, the inspiration. What I wrote became Melodrama Sweetheart.

"It's like setting a trap, waiting for something to happen with that hair-trigger. It's meditation, your willingness to give yourself over to that.