Besides a client base growing faster than bird flu anxiety, Austin online music emporium CDFuse.com has a front-row seat to the rapidly mutating music business. The site, which offers a full range of services to bands – MP3 streaming, Internet radio, merchandising, and access to retailers like iTunes – is up to nearly 400 artists, about half of them unsigned, and growing at the rate of 10-15 new clients a week. Unlike MySpace, which only streams MP3s, shoppers can purchase both songs and albums directly from CDFuse. Owner Sal Silva III, who started CDFuse with J. Erik Schaeffer last January, was frustrated with his experiences in popular Austin pop-punkers Rubberhed and saw a faster way for bands to make their product available to the public.

"We were selling a bunch of albums [locally], and our lawyer kept saying to wait for a deal," he says. "I thought, 'There has to be a way for us to sell and promote our album ourselves.'" There was. "The Internet is changing everything." Silva now fields calls from record companies and entertainment lawyers, quizzing him on which bands are selling well on CDFuse: bad news for A&R men. "Why would labels want to pay an A&R person when they can hop on the Internet and find bands who are already selling?" he says.

Increasingly, labels are realizing that outlets like CDFuse are an ideal way to promote their rosters with minimal overhead; big-time indies Sub Pop and Curb are already on board. "I sent Sub Pop an e-mail," says Silva, "and the guy wrote back and said, 'Your site is killer. We'd love it if you put as many of our artists up as possible.'"

Jeez. One tiny bulletin trolling for news and look what happens: Have you seen Spot? He wants to start a record store upstairs in the former K Bar building, recently bought by Emo's owner Frank Hendrix, and needs inventory... Texas Rollergirl Melicious will memoir her rough-and-tumble sport for a book due in 2007; the lump-ridden ladies smear an Arizona squad Dec. 4... The Action Is, TunaHelpers, Velvet Brick, and Full Stride rawk the She Rocks calendar release party Nov. 29 at the Back Room... The Rolling Stones play Houston's Toyota Center Dec. 1, with Ian McLagan & the Bump Band at the Continental Club on Main that same night. Good news if you're Ronnie Wood... Har Mar Superstar is hanging around, recording with his indie-rock band Sean Na Na... My Morning Jacket cruised Beerland last Saturday to see San Francisco's David Dondero... Youngmond Grand album due in the spring... Local author Josh Frank and Lady of Luxury Juliana Gilchrist embark on a 10-day UK tour for Frank's new Fool the World: An Oral History of a Band Called Pixies after a Nov. 27 bon voyage party. Ask Nic Armstrong & the Thieves where it is... New band alert: Justin, John, and Ken of Winslow team up with American Analog Shawn in the Paper South; first show Dec. 11 at Emo's... Underground slice of Austin life Rock Opera to see a UK release soon... [austin swim] has landed at Redrum... Licorice Tree to release South Filthy LP soon. Italian imprint Rockin' Bones (Winks, Pink Swords) to handle vinyl... Twangers the Texas Sapphires' debut album, helmed by Lloyd Maines, is nearing completion... Will America Is Waiting join a reunited Queensryche on a brief tour of the South early next year? Band members wouldn't confirm or deny, but say, "'Silent Lucidity' is the second greatest song ever written." Finally, College Station's As Long as People Die urge everyone to "support your local death-metal scene." Lucky they're playing the Back Room Sunday, because the only thing dying in College Station this weekend will be the Aggies at Kyle Field. Hook 'em Horns! 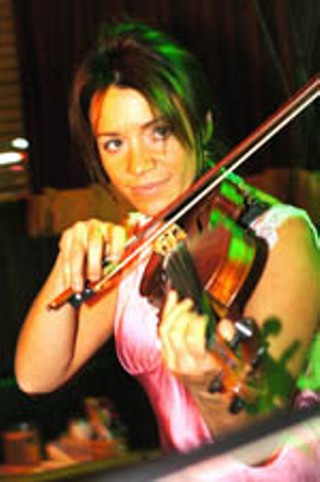 Leather-clad guitarist Link Wray, who gave the world "Rumble," "Jack the Ripper," and "Rawhide," and was said to have invented the power chord, passed away earlier this month. After an eye-popping Electric Lounge date in 1996, Wray played the Continental Club several times. "Link was a plain-spoken Southern guy with nothing but good things to say about playing Austin," says Three Balls of Fire's Mike Vernon. "Especially the Cont-inental Club. He loved Steve and that club." He was 75.

Citing extreme burnout, Redrum general manager Mike Boudreau will be stepping down from his post as of Dec. 31. "I have decided I cannot perform to the best of my ability," he says. "I think that the venue that I work for and the bands that I book deserve more than that from me." Future booking decisions will be the province of owner Erick von Mueller, who can be reached at www.redrumaustin.com.

Direct Events announced last week it will cede operations, management, and booking of Antone's to original clubowner Clifford Antone in January. "Direct Events is proud to have had the opportunity to share in Clifford's vision over the past three years," DE's Tim O'Connor told the Austin Business Journal.

On their way to KROQ's Almost Acoustic Christmas in L.A., sensitive chaps Coldplay will swing by Austin City Limits Dec. 9. Ticket details are still being finalized, but unless you work for KLRU, SBC, or Anheuser Busch, don't get your hopes up. They'll be back Feb. 25 and 26 in Houston and Dallas. Those aren't sold out ... yet.

Holiday perennial Chuy's "Children Giving to Children" Christmas Parade returns to downtown 11am Saturday, starting in front of the Capitol. Bring a toy for APD's Operation Blue Santa, and don't get hit by the flying guacamole. 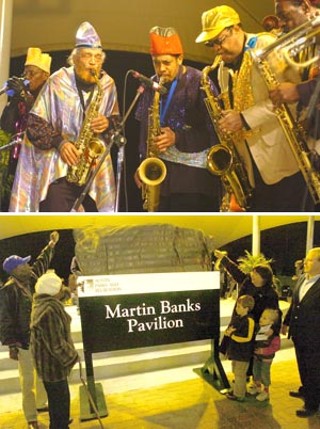 The space was the brand-new Martin Banks Pavilion at East 12th Street's Givens Park, and space was definitely the place when the Sun Ra Arkestra landed Friday night to help dedicate the Pavilion to one of their honored interstellar alumni. After speeches by City Council Member Raul Alvarez and Banks' widow, Leslie, the Arkestra cut loose a brief set of hard swing and serious skronk, welcoming local voyagers Ephraim Owens, Alex Coke, and Donald Jennings onstage for the aptly titled "Blues for Martin," with time kept by Banks' own brother. Banks also played with Duke Ellington, Count Basie, and Dexter Gordon, among a constellation of others, and died last August at age 68. 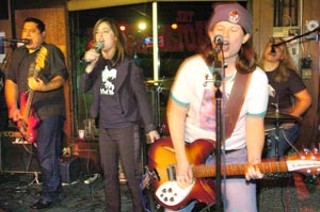 Something strange happened over the weekend: The scene got fun again. Friday's Wannabes/Sincola show felt like the Hole in the Wall's Class of '95 reunion, with singer Rebecca Cannon relearning her lyrics during Mike McCoy's new band Black Rabbits' set and with Sincola (pictured) playing their whole set, topped by the pushy "Hey Artemis" and "Bitch," with no one stalking off-stage. The 'Bes, for their part, marked their 20th anniversary with vigorously beery nuggets like "Dead by August."
More TCB columns