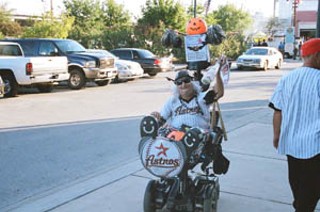 After a solid month of the most incredible baseball the city of Houston had seen since the Bad News Bears broke training in the Astrodome, the Astros finally ran out of gas against the Chicago White Sox in the World Series. They did it in true Astros style, losing Game 2 in the bottom of the ninth on a walk-off homer by light-hitting outfielder Scott Podsednik and Game 3 – the longest game in Series history – in the 14th on another dinger by Geoff Blum, whom the Astros traded to Tampa Bay two years ago for Game 4 starter Brandon Backe. After last Tuesday's extra-inning heartbreaker, no way was TCB going to miss being in Houston for Wednesday's Game 4. Even though he didn't have a prayer of getting into Minute Maid Park for the game (i.e., $500-700 for a ticket), he enjoyed seeing all the "Go Astros!" banners hung among the downtown skyscrapers and soaking in the atmosphere around the Juice Box: TV trucks as far as the eye can see, crazy fans with painted faces, kids playing catch by the statues of Jeff Bagwell and Craig Biggio. TCB met up with Houston Press music man John Lomax to watch the game, a 1-0 microcosm of the season wherein Backe pitched brilliantly and the 'Stros couldn't buy a run. Our subsequent search for Morgan Ensberg's swing and Brad Lidge's slider took us from comfy downtown bar Warren's down the MetroRail line to the Big Top in Midtown, where we commiserated with lifelong fan Jesse Dayton. After that it gets a bit fuzzy, but once the cobwebs cleared, TCB asked Dayton, who left Minute Maid at 1:42am Wednesday, for his assessment. "I've been to a thousand games, starting at the Astrodome," he said. "Went to a bunch this year, and still there was no feeling like there was at the World Series. Little old ladies were high-fiving me. I think it's going to be better than the Stones in December."

Now, back to Austin. What the #$^#$ is wrong with you people? Last Thursday, the three Ortiz brothers of Amplified Heat were involved in an altercation that sent bassist Gian and drummer Chris to the hospital with multiple stab wounds. Chris was stabbed eight times in the face, chest, arm, and stomach – miraculously, no vital organs were pierced – and was released from Brackenridge Hospital Monday. Gian took two hits, resulting in a partially collapsed lung, and was treated and released overnight Thursday. The trouble started on Sixth Street, according to guitarist Jim, when the Ortizes were walking to their car and were accosted by three men, one of whom "had it in for Gian for some reason." Harsh words were exchanged, and both sides were about to throw down when passing police officers broke it up. When Jim was bringing his brothers to their cars on Red River, they saw the three men walking outside the Red Eyed Fly and more shouting ensued. While the brothers were stopped at the light at Eighth and Red River, one man approached the car and Gian got out, touching off the melee that sent Chris and Gian to the hospital and one of their adversaries to jail. The other two ran off before Jim flagged down a police car. Amplified Heat, who had been writing the follow-up to last year's In for Sin, will be out of action for several months while Chris recuperates, and anyone with any information on the incident should contact Austin Police Department Detective Michael Olsen at 974-5471.

Capital Sports & Entertainment announced the dates for next year's Austin City Limits Music Festival last week, and guess what? It's a week earlier: Sept. 15-17, 2006. (Once again, what the @$%#!@ is wrong with you people?) TCB managed to peek at a few bands already offered spots on the bill: the Flametrick Subs, Reverend Horton Heat, the Fiery Furnaces, Sahara Hotnights, High on Fire, Hot Hot Heat, the Hotrails, and Earth, Wind & Fire. At the Thursday-night kickoff gala, local karaoke troupe the DeadMotleySexMaidens will perform a special five-song set of "The Heat Is On," "Fire Down Below," "Heat of the Moment," "Dust in the Wind," and Boogie Nights standout "Heat Will Rock You." 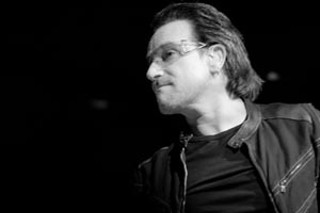 Love and Peace or Else

Only in America will people shell out $150 or more to be lectured about poverty, so it helps when that lecture comes sandwiched between the immortal strains of "Pride (In the Name of Love)" and "Where the Streets Have No Name." Both more political and more personal than ever, U2 again upped the ante for arena-rock theatre last Friday night at Houston's Toyota Center, giving bummed-out Astros fans something to smile about in the process. (Players too: Craig Biggio and Roger Clemens were on hand.) Opener "City of Blinding Lights" set the tone, The Edge's guitar swooping and soaring over a blue-green sea of digital cameras and cell phones. "Vertigo" and "Elevation" goosed the crowd even further, Bono's "Spanish lessons" revealing that after 25 years of trying to write a Ramones song, they've finally done it. A trip back to Boy for "I Will Follow," "Electric Co.," and "The Ocean" was electrifying; just like Gang of Four, their oldest material has gained immeasurable strength in the years of seasoning between then and now. "I feel like we're just getting started," Bono said before "I Still Haven't Found What I'm Looking For," graciously allowing the crowd to handle lead vocals. Turns out he was saving himself for "Sometimes You Can't Make It on Your Own," his eulogy for his dead father so emotional he even took off his shades. Then they got angry: "Love and Peace or Else," "Sunday Bloody Sunday," and "Bullet the Blue Sky" in succession, marked by smoke bombs, jet-fighter noises, and titanic classic-rock heroics from Edge. "Miss Sarajevo" was the night's most moving song: when Bono took over Luciano Pavarotti's heart-wrenching vocal without missing a note, he left about 20,000 mouths open in amazement. They were hardly done with the surprises: tacking "Old Man River" onto "One" and wheeling out Zooropa's yearning "The First Time" and shifty-eyed How to Dismantle an Atomic Bomb outtake "Fast Cars" in the encores. Once upon a time, journalists were told to comfort the afflicted and afflict the comfortable, but U2 actually do it. And if that means reading the Universal Declaration of Human Rights on the video screen and text-messaging your name to Bono's One Campaign, no one complained Friday night. They were too hoarse from screaming themselves silly. 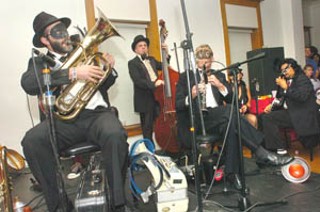 Several hundred of Austin's spookiest scenesters crowded into the American Legion Hall on Veterans Boulevard, done up in the whimsical style of Edward Gorey, Monday night for the annual White Ghost Shivers Halloween ball. The old-timey acoustic hosts pulled double duty, first playing along to Buster Keaton's 1922 farce Cops, then ringing in Dia de los Muertos with a rollicking midnight set of cuts from their new Chicken Ranch disc Live on the Radio and speakeasy standards like "Cocaine Done Killed My Baby Dead." In between, the corpse brides, she-devils, and sumo wrestlers got down to M.I.A. and Michael Jackson, but the evening ended on a sour note when the Shivers' projector (which they had borrowed from a friend) and DVD/VCR combo (with Carnival of Souls still inside) were stolen. For the third time, what the #$@! is wrong with you people?
More TCB columns