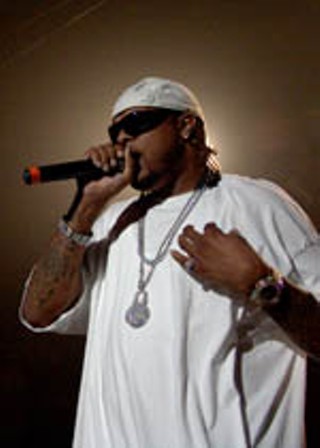 Texas rappers being treated as superstars translated into caravans of oversized SUVs shuttling artists in and out of the Austin Music Hall receiving area Wednesday night, the syrupy glitz of Hot 93.3's annual "Meltdown" spilling onto the street. Inside, out-of-towners including Miami's Smitty, Baton Rouge's Webbie, and San Diego's Lil Rob unveiled their regional variations on a common theme with mostly mixed results, so without question, this night was a local coming-out party for a trio of Houston hustlers each enjoying the surge of newfound major-label success. Between Slim Thug, Chamillionaire, and Paul Wall, platinum becomes a realistic goal for a town traditionally accustomed to gold. Throw in the Astros' clinching the pennant during the show, and the evening was ripe for a no-holds-barred throwdown. Claiming he's been eating so well of late that he might have to drop Slim from his moniker, Thugga stomped through hits "Like a Boss" and "I Ain't Heard of That" like a man well accustomed to his new station in life. Backed by Mr. Rogers on turntables, Slim's 20-minute roll put the healthy-sized house into a strutting mood, squadrons of homeboys in jerseys looking like teams in action. An hour later, Chamillionaire summed up the celebratory intent of the evening with a reinterpretation of Kanye West's "Slow Jamz" that pinpointed "banging CDs, some Screwed Up Clique, and a little Sucka Free, 'cause that's the way I'm feeling tonight." Hearing OG Ron C conclude Cham's set by chopping "Turn It Up" and declaring, "You see, that's the way you DJ a show" left permanent imprints. While Paul Wall's headlining performance culled many shining moments from his new chart-topper The Peoples Champ, it was his guest Trae who managed to "swangin' swangin' swang to the left" so far that he blurred into the adoration of Austin's outstretched arms.