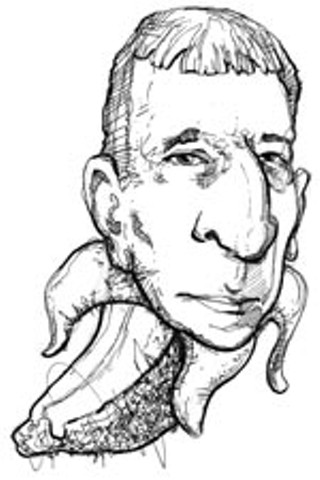 While the term "avant-garde" has been applied to much of John Cale's work, he's always been able to finesse his way out of any hard and fast rule. His music traverses all genres, and tends to veer between his more improvisational leanings and his punk schooling. During his 20-plus years as a solo artist, he's put out albums that have both confounded and enlightened critics. His new release, Black Acetate (EMI), finds the classically trained pianist and violist as elusive as ever, tracks ranging from faux-hip-hop to Bacharach-like sweetness and ambient structures, but "avant" sounds too formal; no matter how bizarre his music gets, tongue is always firmly in cheek.

The Welsh-born Cale, 63, moved to New York in the mid-Sixties, when the underground was cracking open. For musical revisionists, Cale was the warmth under Lou Reed's steely detachment during their time together in the Velvet Underground. His years in the seminal NYC band painted the Warholian Sixties with large strokes. They were a pop band for hard times, sweet and dour at once. After Cale's departure in 1968, he went on to record classics Vintage Violence, Paris 1919, and the instrumental Church of Anthrax. More albums followed, including collaborations with Brian Eno, composer John Cage, and even Lou Reed on 1990's Songs for Drella. Last year's wily HoboSapiens floated through experimental landscapes and viscous dance beats. To that end, Black Acetate is perhaps his most polished album to date, the most "pop." The Chronicle chatted with Cale about his new album, Snoop Dogg, and blow jobs.

Austin Chronicle: How long did it take to record Black Acetate? HoboSapiens came out only last year.

John Cale: We began last September, and we worked for a month and a half. Then we picked it up in January for about three weeks. Then we took a break, because I was trying to get away from Hobo. In the end, we had something like 48 songs to choose from, and I really didn't want to do another album that had the same mood. It was very dense. Some of it was very hypnotic and beautiful, but I wanted to get back to something simpler. I started off with a flying V [guitar] and a Marshall stack and improvised our way through a bunch of songs like "For a Ride" and "Outta the Bag." But I was still ending up with these dense constructions. Then someone played me the Snoop Dogg single "Drop It Like It's Hot," and I realized I was barking up the wrong tree. I'd forgotten all about minimalism.

AC: So you're getting back to basics?

JC: Yeah. "Woman" is a good song, but it has this dual personality to it; "Hush" I really love, because I managed to live without a bass. That shows me there's a road ahead. That's where I'd like to pick up. I don't want to go through 48 songs again. I want to jump on something right away. I never like to do anything that I've done before.

JC: This album was [written] in the studio. I really worked on having some funky grooves on this, laying down the rhythm bed on all the tracks myself, so it ended up kind of being a one-man band. If I needed a guitar solo, I could find [Acetate guitarist] Dave Levitta.

AC: You mentioned the Snoop Dogg single, and "Brotherman" sounds ...

JC: "Brotherman" was a joke. It's one of those tracks ... it just happened. I was in there just ranting away and people were laughing in the booth, so I just kept going. It was me trying to avoid being political, and you can feel the strain.

AC: Do you listen to hip-hop?

JC: Yeah, yeah I do. I always mention Pharrell [of the Neptunes] because he's interesting. That first Snoop single I heard, everyone's sitting around listening to it saying, "Is that a spray can?" He's making a comment about all of this; it's not just that he's using it as a rhythm instrument. I like that.

AC: What acts do you think are doing something different right now?

JC: [Def Jam artist] Rhianna is doing something different right now, I love her. She's got a single "Pon de Replay." The album, it's almost all hits. The grooves in there are phenomenal.

AC: You have a few Austin ties, and you're producing the new Alejandro Escovedo album. How did that come about?

JC: I've known Alejandro for years. When Sterling [Morrison, Velvet Underground's guitarist] was alive, we'd hook up. When we finish the tour I go into the studio.

AC: You've also been at the helm of Patti Smith's Horses and the first Stooges record. Did you think then that they'd become the classics they are now?

JC: Yeah, kind of. I mean, I didn't know until I got in the studio. Patti is irrepressible. She's really a poet. And the Stooges ... there's a hard core in both of them. It really becomes about reining them in. In the studio, you have to cut them loose, but you have to know how to rein them in. For a first-time band in the studio, there are sensitivities there you have to be careful of. They were very family-oriented groups, you know, everyone sticking together, everyone really inside each other's head. So when someone comes along and says, "That guitar has not been in tune, will not be in tune, ever," you go and get them another one. Then they say, "What's wrong with my old one?" You have to be gentle.

AC: What do you think of the younger acts making music today, the bands that cite VU as an influence. Any of them stand out to you?

JC: There's this site called ... MySpace.com? I couldn't believe it. It's a dream for the record companies; you don't have to leave the house. [After a quick scan, it seems Cale has a MySpace account; whether it's legit or some 19-year-old frat kid is another issue.] And ya know, [with the VU] you really learn the value of a bridge, where to put the hook. It's not slipshod stuff.

AC: Is there a decade when you felt we were going in the right direction, politically, musically, economically?

JC: Yeah, it's the decade I was out of it. I wasn't paying attention. I don't think the Velvet Underground ever did anything for the Vietnam War; politics was more local than that. It was: How do you kill your kids with heroin?

AC: You have a daughter, right?

AC: Do you ever catch any music she's listening to?

JC: No, she's at the age where she's aggressively seeking out her Welsh heritage, and so she really gets a lot from that.

AC: Do you still enjoy touring?

JC: I do with this band; we have a lot of fun together. They're a little nutty.

AC: How do you feel in the current political climate? Do you feel the strain?

JC: Yeah, in general since Bush got into the White House. There was a women's rally in Washington the other day on TV and someone was holding a sign that said "Will someone please give him a blow job so we can indict him?" Good idea.