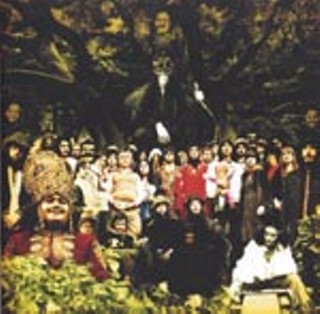 Critics love attaching the "freak-folk" label to everything Devendra Banhart does, and while that label may have applied to last year's fantastical Rejoicing in the Hands, the nomadic 24-year-old Texas-born singer/guitarist eschews that label here in favor of the more loving embrace of "The Family." Visions of Charles Manson may still dance in your head, but on Cripple Crow, his fourth full-length, Banhart's gaze is fixed on a worldly opponent, incorporating Latin and Native American genres into a solid musical cadre. Helping out is a close-knit group of musicians with whom Banhart has collaborated in the past (Joanna Newsom, Andy Cabic of Vetiver), as well as sundry other kindred spirits. It's a more mature sound, as heard on the jazzy "Some People Ride the Wave," the Southern stomp of "I Feel Just Like a Child," and the Neil Youngism of "Hey Mama Wolf." "Heard Somebody Say" floats along like a modern-day protest song, making "It's simple, we don't want to kill" sound like religion. His obsession with all things childlike gets hilariously creepy on the doo-wap "Little Boys" ("I may not look it, but my heart is young"), but it all feels so right. Aww, our little freak is all grown up. (Devendra Banhart plays Emo's Monday, Oct. 10.)