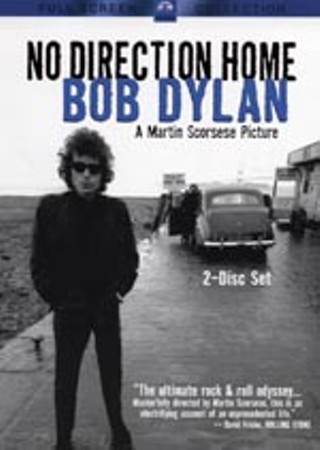 No Direction Home: The Soundtrack (The Bootleg Series Vol. 7) (Columbia-Legacy)

Live at the Gaslight 1962 (Columbia-Legacy/Starbucks)

Bob Dylan's body of work is so vast and varied, so luxurious in its allowance for perspective and comparison, that it now informs the American experience instead of the other way around. But the other way around is exactly where Martin Scorsese starts his four-hour study of Dylan's 1962-1966 ascendancy. No Direction Home, out on DVD but also airing on PBS in two parts on Monday and Tuesday, opens with Dylan today discussing the notion of his setting out on an odyssey almost a half-century ago, escaping the drab, middle-class trappings of Hibbing, Minn., to search for his place in the world. It closes, disturbingly, with footage of a nearly catatonic 25-year-old superstar rocking back and forth and telling an Italian journalist he just wants to "go home." In between is a skillful documentary that at times seems too polished and at others as piecemeal as some of its subject's best work. The director's perfectionism and reverence for the authentic run high here; No Direction Home is both a labor of love and an even-handed treatment of a mythologized time. In examining a light that exploded out of nowhere, he submits his findings like a scientist while styling a rich visual rhythm. Questions are posed, and questions are addressed. Theories are floated. Music is played, too. Some of that music is available on Columbia's companion "soundtrack," but I hesitate to recommend it. Outtakes, for instance, are outtakes for a reason, and Dylan had a sense of what to put out and what to discard that rarely failed him. Listening to how "She Belongs to Me" evolved can be interesting – as is listening to a high-schooler whose father just wanted him to work a few hours in the family appliance store wail out "When I Got Troubles" – but most of the people interested in doing so already have. Similarly, the new Starbucks-only release, Live at the Gaslight, legitimizes a widely circulating bootleg, but little else. It's a kid with a guitar and harmonica on a coffeehouse platform sharing powerful songs like "A Hard Rain's A-Gonna Fall" and standards like "Barbara Allen," and if he had stopped there, he would have satisfied a lot of people for a long time. But he didn't. And, despite the posthumous feel of this rash of recent releases, he hasn't.