I've Got My Own hell to Raise (Anti) 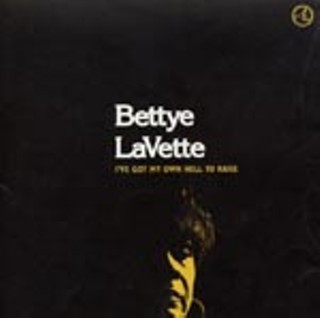 I've Got My Own Hell to Raise (Anti-)

The ever-elusive genuine article becomes rarer by the day. Brought to light by the same folks who helped resurrect Solomon Burke to Grammy status last year, Detroit's soul singing sensation Bettye LaVette emerges as producer Joe Henry's latest diamond in the rough. Supplying the blueprint borrowed by the likes of Janis Joplin and Chris Robinson, LaVette wields a 40-year tenure within the deepest recesses of the music industry. In 1962, at the age of 16, she charted high enough with Atlantic single "My Man (He's a Lovin' Man)" for the song to be covered by Tina Turner and Ann Peebles. Beyond her label dropping the ball on her 1972 Muscle Shoals recording and enjoying a Seventies disco hit or two, LaVette resigned to an active yet obscure career as a lounge legend. Thank heavens that Anti- Records had the wherewithal to coax such a lost R&B treasure into the studio for I've Got My Own Hell to Raise. Surrounded with an accompanying cast including Texans Doyle Bramhall and Earl Harvin, LaVette cuts stark, heart-shaped silhouettes through compositions written by Lucinda Williams, Sinead O'Connor, Joan Armatrading, and Dolly Parton. Just as at home with a busy Funkadelic backdrop as she is within an a cappella vacuum, LaVette's yearning blues transcend place and time. (Saturday, 4:30pm, Capital Metro stage)