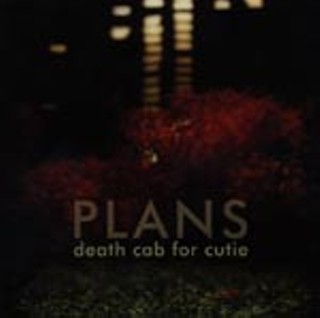 Death Cab for Cutie isn't mysterious. Ben Gibbard isn't even cool. They don't wear black leather jackets in the summer, they don't sing about one-night stands, and they say things like, "We put the punk in punctual." Maybe that lack of pretension is how the Seattle foursome can make such heart-wrenching music. Their major label debut, Plans, isn't their best work to date (that honor would go to 2003's Transatlanticism), but it's literary, heartfelt, and perfectly molded. Opening with trademark Gibbard, "Marching Bands of Manhattan," Plans dashes from love to loss, beginning to end. With grace and candor, Gibbard muses Sunny Day Real Estate with "Soul Meets Body" and memorializes Transatlanticism with "Summer Skin" and "Different Names for the Same Thing." Where his growing maturity beams is in acoustic folk song "I Will Follow You Into the Dark." From this point on, the songs pass like the stories they speak of: time on the road, broken hearts, shot expectations, and death. But it's not nearly as sad as it seems. "Love is watching someone die," he sings in "What Sarah Said," because it's honest. DCFC might not be hip, beautiful stars, but they might be the closest thing to the truth. (Saturday, 4:30pm, Cingular stage)