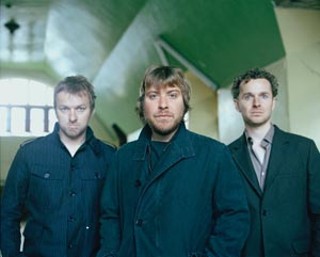 Wouldn't you know it, "doves" is slang for the teeth-grindy lovedrug MDMA, or Ecstasy. But then anyone familiar with the similarly named UK trio probably could've guessed that.

For starters, their past two albums, 2002's The Last Broadcast and this year's Some Cities, are as euphoric and uplifting as a night of dancing and "disco biscuits." Consider also that twins Jez and Andy Williams and Jimi Goodwin's previous endeavor was the techno troupe Sub Sub, who hit No. 3 on the British charts in 1993 with "Ain't No Love (Ain't No Use)."

Oh yeah. They also happened to grow up in Manchester, the northern industrial city that bequeathed the Happy Mondays and Stone Roses – not to mention the less pharmaceutically active Buzzcocks, Joy Division, and Smiths – to the world. According to Goodwin, it's not all 24 Hour Party People for Mancs.

"There's amazing music coming out of this city, and I don't know why that is," he says by phone from his flat. "I won't give you a trite answer like it's in the water and all that shit. The thing that joins these bands is a seriously individualistic sort of desire to sound like no one else."

Mission accomplished. Though a million sounds swirl through the epic popscapes of Broadcast and Cities – Goodwin says the band loves hip-hop, soundtracks, Interpol, and the city of Chicago – no true analog exists. You might say it's the Flaming Lips jamming at Coldplay's house, or a grand mash-up of U2 and the Charlatans UK, but why bother? To Goodwin, what matters is that the 11th listen sounds better than the first.

"That's the intention," he says. "Little things and layers, subtle things going on that you never heard the first time. That's very important to us."