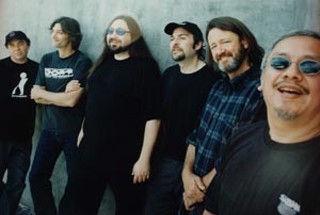 As 2005 dawned, Widespread Panic had been on hiatus for 18 months, the first real break the Athens, Ga., juggernaut had taken in 15 years of relentless music-making. For the past nine months they've almost made up for being away, returning to near-constant touring. Taking their rootsy brand of Southern rock informed by jazz and blues back on the road, they have occupied headliner spots at Lollapalooza, Bonnaroo, and now Austin City Limits.

"I was worried at first," admits Dave Schools, Widespread's bear of a bass player. "Was it going to be us just playing the same songs we've been playing for 15 years over and over again, which would have bummed me out, or was it going to be something different? It turned out to be the latter and that turned out to be us saying, 'Hey, let's write 10 new songs.' It was the best of all possible scenarios. Then when we got back on the road there was so much energy coming from the audiences, and we were just so happy to be back together, that the tour really turned into something special."

In the jam-band world, Panic seems to have filled the mighty big shoes left empty with the breakup of Phish. Schools disagrees.

"Have we replaced Phish? Hell no. There's no way we could do that in the same way that they were accused of replacing the Grateful Dead," he maintains. "Phish would have never participated in all those festivals. They would have done their own thing. We're involved in three incredibly different festivals, but I think the message is that it's all about music. That's the key. Are we the heir apparent to whatever is going on in the jam-band world? I don't know. It's not for us to decide. We're just out there still having fun."