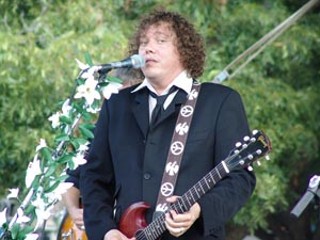 Bobby Bare Jr. was quite possibly the sweatiest man in Zilker Park during last year's ACL Fest. Doing hard time on the small BMI stage, the Nashville-based shaggy-dog singer donned a black suit and belted out his signature pathos-lined, good-time alt.country to a modest but enthusiastic audience. This year, Bare Jr. and his players have gotten a promotion.

"We're getting paid to play this year," jokes Bare. "The only drawback is we're the first band playing Friday morning. I hope someone's there to see us."

Considering his loyal Bat City following, the faithful who'll line up to see him from the Continental Club all the way down to Gruene Hall, that shouldn't be a problem. Meanwhile, Bare Jr. reports that he plans to have the follow-up to 2004's From the End of Your Leash (Bloodshot) ready by SXSW, but what he's really eager to talk about is his latest project: his pop, country singer-songwriter legend Bobby Bare. Baby Bare has just produced The Moon Was Blue (Dualtone), Papa Bare's first album in 22 years. Why the return to the studio for Big Daddy after all these years?

"For me, it's like show and tell," explains Jr. "He's either fishing or hanging out on the couch. This is a guy who plays with my daughter and kisses my mom and yet is this unbelievable singer."

On Moon, Bare and his sultry baritone give songs like Harry Nilsson's "Everybody's Talkin'" a classic-country overhaul that's both melancholy and spry. His son hopes that Moon will be an entrée to Bare's work that the younger generation wouldn't have otherwise.

"Most people haven't heard him and I wanted to share that," says Jr.

Now try getting him into a black suit.