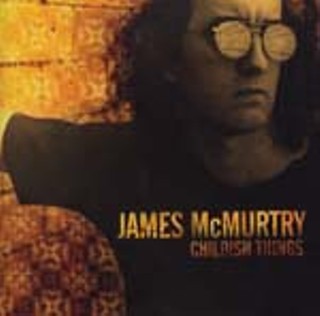 "When I was a child, I spoke as a child, I understood as a child, I thought as a child; but when I became a man, I put away childish things." James McMurtry adopts Corinthians 13:11 as title and theme of his latest LP, pondering life after such things have been put away. Childhood excursions to parking-lot circuses become lectures from the wife who wants to know, "When you gonna act like you know you should?" Like Bob Dylan, 43-year-old McMurtry specializes in character sketches writ large, illuminating the inner lives of ordinary people through detail-rich portraits of their circumstances and surroundings. It could be the drifter in the dried-up town of "Six Year Drought" or the trucker hung up on some long-ago hitchhiker in "Pocatello," but McMurtry's characters often spend the present wrestling with their past. Elsewhere, he opens up the family album on the whimsical "See the Elephant" and "Memorial Day," and considers the bleak state of the union on "We Can't Make It Here," where it's McMurtry's tone of resignation, not anger, that makes the words really sting. Put away childish things and you're left with adult realities, so when McMurtry sings, "All I want now is a comfortable chair," he's more than earned it.