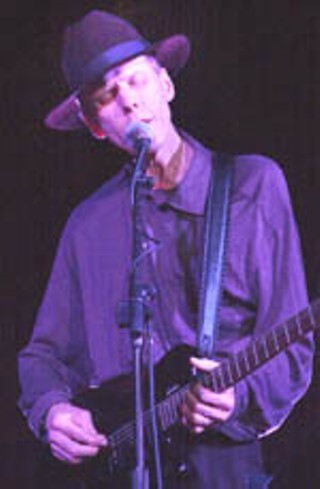 The myth encasing the Houston musician known as Jandek has evolved into different beasts: He's a recluse, he's mentally unstable, he doesn't really exist, he's a hologram beamed from space. He's done one face-to-face interview and his career (or anti-career) has spanned 40 albums since 1978. His music is subtly terrifying; it's the moth-eaten curtains, the dust under the bed, the crack in the ceiling, and we just happen to be spying through the window. He's infatuated with early American spirituals – the singular, lonely voice, the erratic guitar strumming, the blues death knell. On his 1982 LP Chair Beside a Window, he whispers, "We can't deny there are spirits in this house." On Sunday night that rang true. He floated onstage, a wisp of a man in a pressed blue shirt and black pants. He wore shiny black shoes and a black wide-rimmed hat, his pale, drawn face partially obscured. He methodically took out his guitar and strapped it on, and the silence in the sold-out, 300-seater was thick, until Jandek cut it with the first of many jarring strums. Backed by two drummers and a bassist (all of whom looked at least 20 years his junior), the pale one delivered a spirited sermon, his cadence like that of an anguished Dylan. After lines like "I'm an ugly man, not beautiful like you," and "It gives me pleasure to be in pain," Jandek smiled, like he just got a private joke. The pace was arrhythmic, the music grating, but there were moments where the band really started rocking, where all the noise and percussion came to a sharp point and Jandek swayed back and forth. The crowd looked back at him in polite awe, like scientists watching the mating ritual of a rare bird through the bushes. He abruptly ended the show 90 minutes later by taking off his guitar and turning off his amp, picking up his lyric book and walking into the darkness of stage right.