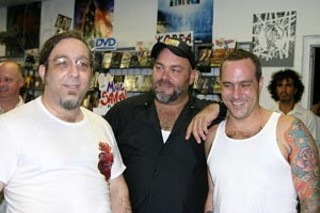 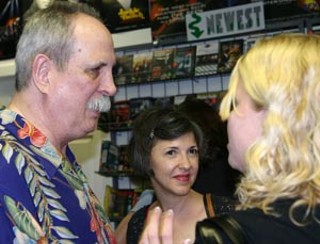 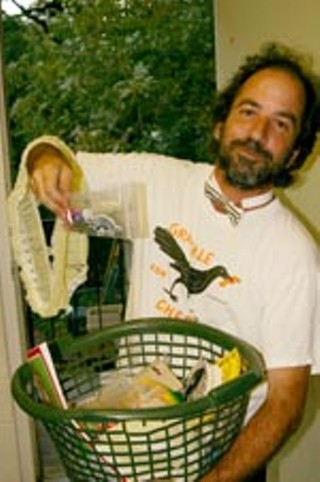 The first red flag went up when Turner failed to deliver his artwork to Pedazo Chunk, and Marc Savlov, who wrote last week's Chronicle cover story on him, went to his house Thursday afternoon and found it quiet and dark. Savlov alerted police, who found the body inside (see "True Today"). 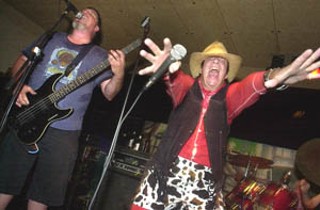 While the exact time of death remains unknown, the Travis County Medical Examiner's Office's preliminary report puts the cause of death as gastrointestinal hemorrhaging resulting from cirrhosis of the liver. He was known to have hepatitis C and diabetes, but his friends and family contend Turner was not a heavy drinker. "He always asked for cranberry juice," said Josh Chalmers of Oh, Beast!, who shared the bill at Turner's final onstage appearance, with new band the Texas Biscuit Bombs, July 23 at Room 710. For an update on the ME's findings see "Postmarks."

At the wake, a giant sheet of paper labeled "Biscuit Timeline" covered one entire door, and people lined up to write memories and messages. Some wept, while others passed around joints rolled from Turner's own stash. Inside, a video of Turner leading Honky through ZZ Top's "Heard It on the X" ran on continuous loop.

"It was a pleasure to work with the man but more of a pleasure to know him," said Honky's Jeff Pinkus. "When he felt good, it was contagious. Damn, he'll be missed."

What seemed like the entire Austin music scene – SXSW directors, Red River club owners, Turner's old bandmates, and friends too numerous to mention – turned up to remember Biscuit. Thanks to the keg out back and the Pecan Food Mart next door, the initial hushed tones gradually became lively conversations punctuated by frequent laughter. Flipnotics owner Mark Kamburis once gave Turner a mint condition Big Boys LP and got a purple plastic pig in return.

"He told me, 'When I get a gift, I like to give one back,'" Kamburis said. Friday night, Biscuit kept right on giving. 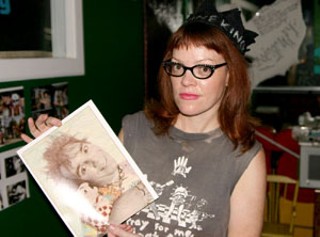 Punkaroos singer Dotty Farrell (pictured) played with Biscuit in Swine King and remembers her dear friend. "He meant the world to me," she says.

"I am not sure where or how to begin ... the loss is so immense, the sadness so profound. As I write this, I am reminded of how it was always Randy who could somehow always find the perfect words to help us all understand and find a way through the sad and difficult times. There are no words to say how much he is missed. There's a giant hole in the heart of Austin. I still can't believe he is really gone. I miss him so much my heart could pop.

"We first met at a Big Boys show at Nightlife just after I arrived in Austin in June 1983. I knew no one when I moved here. He was so funny and friendly and accessible. It meant a lot that he actually remembered me and always talked to me. In hindsight, I guess he was my first real friend in Austin.

"I was blown away by the Big Boys. The shows were amazing, the music irresistible, and the words and ideas inspiring and empowering. Randy always made us proud to be different and encouraged us to go out and make the world a more fun and better place. He really embodied so many of the things that made Austin the only place to be. Over the years, we shared a special bond that made us "partners in crime" – creating art, making costumes, playing music, performing in theatre productions, working together, and just plain having the time of our lives hanging out.

"I am so fortunate to have had in my lifetime such a thoughtful, loving, wonderful friend. As long as we are alive he will always be alive in our hearts. Now, go out and make Austin weirder ... he would want it that way!" 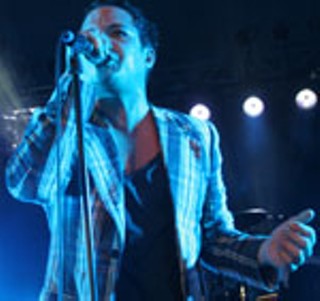 Las Vegas retro-rockers the Killers don't seem to mind that the runaway success of last year's Hot Fuss has painted a big hipster bulls-eye on their backs, not when selling out venues like Stubb's in two hours. The stage set, complete with risers, resembled a Vegas showroom, and the band, doll-like singer Brandon Flowers (pictured) and animated drummer Ronnie Vanucci especially, played to the back row of the crowd like Siegfried & Roy. Instead of white tigers, however, it was song after song loaded with hooks and oozing decadent allure: "Jenny Was a Friend of Mine," "Smile Like You Mean It," "Andy You're a Star." The Killers have taken a lot of flak for their liberal appropriations of Eighties music, but they do steal from the best: the colorful keyboards of the Cure and Alphaville; the taut, wiry guitars of U2; and the whooshing bass and drums of New Order. Their vivid minidramas of jealousy and obsession still sound like nothing else on either Pitchfork or TRL, and it's unlikely Bloc Party could generate the kind of charge that shot through the crowd when Dave Keuning's guitar squelched out the first few notes of breakthrough single "Somebody Told Me." And when the gospel chorus of finale "All These Things That I've Done" began to crescendo, the Mt. Olivet Baptist Church choir from that afternoon's Austin City Limits taping was absent, but the audience filled in just fine.

Allen Damron, performer and co-founder of the Kerrville Folk Festival, passed away from pneumonia complications Aug. 13 at his home in Terlingua. Damron, 66, also performed regularly at the Texas Folklife Festival, appeared in 11 movies, and was featured in Jim Gramon's recent book Famous Texas Folklorists and Their Stories. In the late 1960s, the Raymondville native managed the Chequered Flag on Lavaca Street, a club pivotal in the development of the so-called "Austin sound" of singer-songwriters like Jerry Jeff Walker, Gary P. Nunn, and countless others. An Eagle Scout and lifelong NRA member, Damron was named a "Goodwill Ambassador to the World" by the Texas Legislature in 1986, and is survived by wife Marie and numerous family members. Memorial services are planned for Saturday at Miss Tracy's in Terlingua and Sept. 4 on Chapel Hill in Kerrville.

Blind item of the week: Last week at Threadgill's World Headquarters, an inebriated patron decided to tickle the ivories of the piano in the lobby, and, before an entire dining room of onlookers, was promptly Tasered by an off-duty police officer who happened to be eating dinner. Nice to see the zap-happy APD is expanding its electrifying activities beyond the city's minority neighborhoods.