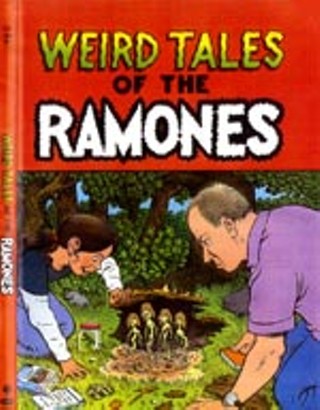 The Ramones anthology has come as least as far as "Rockaway Beach" since 1988's single disc, Ramones Mania. In 1999, the 2-CD Hey Ho Let's Go!: Anthology got three-fourths of this Queens-punk drama right before fumbling the ball on the goal line. 2002's Johnny Ramone-curated Loud, Fast Ramones: Their Toughest Hits boiled down 20 years like a baseball bat to the brat, bonus disc included. If you own only tattered vinyl of the first four LPs, then by all means, Weird Tales of the Ramones should be your next birthday present. Even if you've hoarded the entire catalog digitally, including both helpings of Rhino album reissues, Weird Tales is your undoing, too. Though still not the Holy Grail career overview of punk rock's Beatles – it's Anthology completed when it should've been the Faces' Five Guys Walk Into a Bar ..., archival reimagining – this 3-CD/1-DVD comic book is perfect in at least one respect: packaging and graphics. Again compiled by the late Johnny R., musically, the set short-shifts End of the Century and Pleasant Dreams, which the guitarist considered Joey albums. And Joey was not Johnny's buddy. Dee Dee was, so the pair's Too Tough to Die hardcore thuds, "Wart Hog" and "Endless Vacation," are included over brawlers like "Let's Go," "This Ain't Havana," and "We Want the Airwaves." The last midperiod gasp, 1986's Animal Boy, remains egregiously unreissued, so "Apeman Hop" is missed, while disc three tries valiantly but just misses redeeming the band's final recordings. At just over an hour, the DVD – videos with an optional wraparound minidoc – didn't exactly plunder the vaults. Then there's Weird's comic booklet, the last word/panels in Ramones illustrated, from Skeletor cover boy William Stout to Mad genius Sergio Aragones and the heartbreak trio "Me & Joey & Joe," "Where Are You, Joey?," and "Liz Fox." The 3-D barely works, but when did it ever? Alfred E. Neuman may be missing in face, but his gap-toothed grin will be plastered on yours.