The Applicators apply themselves, inside the Bubble Empire, and more 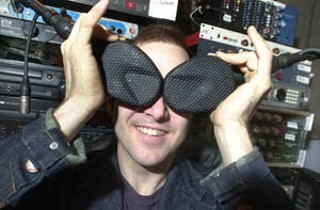 Local musician, producer, and Bubble Studios co-founder Chris "Frenchie" Smith is usually as animated offstage as he is cranking out the riffage with Young Heart Attack. Whether talking about good friends like the Applicators or the thrill of opening for Ted Nugent, his enthusiasm for boisterous rock & roll is palpable, and, not surprisingly, it's almost off the charts when he starts in about his new record label, Bubble Empire Recordings. "It's a natural progression of things I love to be a part of," he says. "Making records, playing gigs." It's also a byproduct of watching his friends chase the proverbial major label rainbows at the expense of more realistic goals. "I'll work on bands' records and be real proud of 'em, but then [nothing happens], and the bands get disillusioned," he says. Smith has fashioned Bubble Empire after bygone local labels like Trance Syndicate, Rise, and Unclean (he calls Unclean's Roger Morgan "my idol"), hoping to help bands get a foot in the door regionally – he notes it's nearly impossible now for bands to book a show without some sort of recording – and make it so "you don't have to put your life in the pawnshop to work off the first pressing of your album." Due Sept. 2, Bubble Empire's maiden release is Desolation Chic, the debut from Houston/Austin glam wastrels the Urgencies, whom Smith first met when members Al G. and Mike McWilliams' former band Teen Cool practiced next door to the old Bubble off Slaughter Lane. "Tattoos, rocker hair," says Smith, who went on to produce Teen Cool's EP. "They made a massive impression on me." Pocket Symphonies' debut, four years in the making, will follow later this year. "I can't promise [bands] the world," Smith says. "But I can promise I'll pick up the phone when they call." Spoken like a true record man. 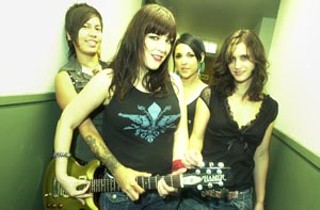 All hands on the bad one: The Applicators (Photo By John Anderson)

Popular Austin femme-punks the Applicators have, once again, finished their second album. After 2001 debut What's Your Excuse, "We actually wrote another album," explains guitarist Erica Applicator, "but we evolved past what we wrote pretty fast." (Like the Ends and Ramones, the Applicators embody punk rock solidarity via a common surname.) Album No. 2 came "in shifts" over two hectic weeks, with producer Chris "Frenchie" Smith egging them on. "I sang my ass off," testifies vocalist Sabrina Applicator. "Frenchie's a slave driver, but we love him." Longtime friend and Epitaph Records employee Hector Martinez now handles their business affairs, and things have picked up appreciably. The new album, as yet untitled, is being mastered in Los Angeles this week, after which Martinez will shop it to labels (including, presumably, his employer). Back home, the band has been adjusting to last month's split with drummer Stephanie, on which the ladies opt to remain mum, and auditioning new timekeepers, a process Sabrina says makes her feel a little like American Idol's Simon Cowell. "The hard part is when they're really nice but not as skilled as you'd hoped they'd be," she says. Eight people, including a boy(!) and one girl who bought a new drum kit for the occasion, have tried out so far, and they hope to find someone by Sept. 19 at Emo's, their first confirmed show since the Texas stops of this year's Warped Tour. In October, they'll set out for the 100-band Wasted USA festival in San Bernadino, Calif., alongside Flogging Molly, TSOL, the Exploited, Dickies, Turbo AC's, and Austin neighbors the Krum-Bums and Lower Class Brats. As a band long accustomed to heavy touring, "The gap between records has really put a dent in our itinerary," says Erica. "There comes a point when you need an album." So after six years of juggling Applicator life with work and kids – Sabrina and Erica each have elementary-age daughters – they're both pragmatic and grateful. "It really does take a village," Sabrina says. "You have to have supportive family and friends to be able to do it."

Compilations can certainly go horribly awry, like the frightful new Killer Queen tribute with Jason Mraz, Gavin DeGraw, Joss Stone, and Sum-41 (plus the Flaming Lips, Josh Homme, and Los Lobos), but they have a much better track record locally. New labels can provide a CV, bands keep their name in the mix between albums, alliances eventually (or suddenly) get formed, and fans get an inexpensive sampler of a good-sized slice of the scene. Also, the release shows are usually great. At least that's how it's supposed to work, and it does on I Eat Records' Appetizers & Leftovers and Almost There's Turn 1, its first volume of a planned yearly series. I Eat was formed this year by Lynn Boland of the Casting Couch and Okkervil River associate Jason Callahan, and, following Casting Couch's EP this spring, already has a hefty slate of fall full-lengths: the Glass Family, Handsome Charlies, Ethan Azarian, and a compilation by Azarian's Orange Mothers. Fifteen artists on the 21-track Appetizers, which combines off-kilter alt.country from Athens, Ga., and Austin, have never before released anything commercially; this, notes Callahan, "is the first time their music has ever been heard outside their living room." Almost There's Ty Chandler, who actually got a tribute album right with last year's Who's Who, sees his forthcoming Turn 1 as a way for established bands like Grand Champeen, Moonlight Towers, Li'l Cap'n Travis, and Those Peabodys to offer newer ones (Fall Collection, King Tears, Hackberries) the same example they, including Chandler himself in Saratone and the Trustees, once got from Electric Lounge all-stars Prescott Curlywolf and Silver Scooter. The release show Aug. 27 at Stubb's alone, with no less than 12 bands (all those mentioned and more), promises Prescott-worthy moments aplenty.

WHERE BANDS HEARD ON THE SHOW THIS YEAR WILL BE: Arcade Fire (with the Black Keys), Stubb's, Friday; Wilco, Stubb's, Saturday

WHERE TO ZONE OUT AND HAVE A CHAT WITH THE LATE NATE SR.: M83, Emo's, Friday

WHERE PEOPLE WHO WORKED WITH NATE JR. AT THE FOOD CO-OP IN SEATTLE MIGHT GO: Hairy Apes BMX, Stubb's (inside, late), Friday

OR DAVID, WHEN HE HAD THE GOATEE: Slightly Stoopid, Parish, Saturday

WHERE BILLY MIGHT GO TO RELIEVE HIS OBSESSION OVER CLAIRE: Built to Spill, Decemberists, Sons & Daughters, La Zona Rosa, Saturday

The Austin Music Network announced this week the channel would cease operations on Channel 15 Sept. 1, yielding to the privately held venture now known as Music Entertainment Austin – but might live on as an Internet-only station. More, undoubtedly, in the weeks to come.

San Marcos' Seventies-loving Spiders shake off a long hiatus and stir up some T. Rex attitude next Saturday at Room 710 with Blood Burnin'. With Karl Toft now occupied with Flato Van Vleck, Sonic Uke, and the Passed Out Flyers, the Glitzkriegers' bass duties now belong to Colin Downs of Fluffers Union, themselves soon to start a 710 residency.