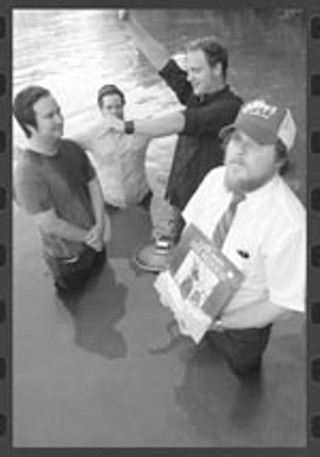 It's a muggy, mid-July Friday evening at the Dell Diamond, and tonight's game is running on rock & roll time. The Round Rock Express are back from a four-game stand in Iowa to face the Nashville Sounds, but their equipment isn't at the ballpark yet. Although the PA is blasting the Black Eyed Peas' "Let's Get It Started," scheduled start time was more than 30 minutes ago. When the Express finally do get it started, their midseason fatigue is hard to disguise.

Even so, the languorous minor league setting is a fine backdrop for talking music with Crack Pipes vocalist Ray Pride (né Colgan). As the stadium DJ pumps out jock jams between innings, our conversation veers from Bob Wills and Aretha Franklin to Black Sabbath and Memphis' Oblivians. You can hear the thoughtful enthusiasm in Pride's soft voice as he traces his musical evolution. You can also hear it on Beauty School, the Crack Pipes' fourth and most fully realized album ("Texas Platters," Music, April 22, 2005).

Pride grew up an only child in Anchorage, far removed from the pop cultural traffic of the Lower 48. He followed the Anchorage Glacier Pilots of Alaska's summer college baseball league and listened to classic rock on the radio. Punk hadn't made it to Alaska, so Pride first heard the Clash through the prism of classic rock, immediately discerning the similarities between Sandinista! and the Rolling Stones' Exile on Main Street. He gravitated toward these sprawling albums and their steadfast bucking of easy categorization.

"You can really hear that with the Rolling Stones," Pride says. "Within one album, they'd have a blues song, a reggae song, and a honky-tonk song. Whatever music brought them enjoyment, they made it their own."

That philosophy comes through loud and proud on Beauty School. From the country blues shuffle of the title track and the funky garage breakdown of "Sexy Pepsy" to the haunting, esoteric burble of "East Side Injections," the LP sounds like the musicians who cut it own lots of records. Citing stylistic similarities between the group's sophomore LP, 2001's Every Night Saturday Night, and 2003's Snakes in My Veins, the band's guitarist Billy Steve Korpi says the quartet wanted something different for Beauty School. "I remember being cautioned and told to reign it in because you can't have a record that has all this different stuff on it," Korpi recalls. "'It doesn't make sense.' 'It's going to confuse people.'

"Obviously, I don't think anybody in this band really cares about that."

Despite becoming enamored of music in early childhood, Pride's musical aspirations weren't obvious while growing up.

"Most of my life, from when I was real young until way after college, I was always under the belief that I didn't have a musical bone in my body," he admits. "In elementary school music class, they'd give me a recorder and I couldn't make anything come out of it."

It wasn't until Pride arrived in Austin that the idea of starting a band took root. Surrounded by musicians at his sandwich-making job and inspired by local mid-Nineties garage punk bands like the Inhalants, Pride formed the Crack Pipes in 1995 with drummer Mike Corwin and original guitarist John Patterson. Ironic band name for someone who doesn't drink or do drugs.

"What do you think of when you hear 'Crack Pipes'?" asks Pride. "It's the bad side of town, the dangerous part of town, and that's where all the really good rock & roll comes from." From the beginning, the songs were birthed out of Pride's lyrics. Corwin notes the singer's concurrent involvement with the Slack Panther Poets in the Crack Pipes' early days to emphasize the value Pride places on words.

"His singing's definitely gotten way better over the years," attests Corwin, "but lyrically, he's always been great. He really has a talent for words."

"There's garage rock bands that try to re-create the Sixties by wearing matching suits and playing through vintage equipment," points out Pride. "Then there's a band like the Oblivians that plays through whatever they can afford to get their hands on. They're about trying to capture the energy.

"That's more what we're about."

By contrast, Korpi came to the band with a long, eclectic musical résumé grounded in a youth spent listening to R&B records played by his older brother, former Evan Johns/Naughty Ones guitarist Mark Korpi. He joined the Pipes sound unheard based on Pride's description of their music. "When I showed up to learn the songs, I didn't understand what those guys were trying to sound like," admits Korpi. "But I wasn't going to quit until I figured it out." Pride's calfskin voice belies his ability to belt, screech, and blow harp with frenzied Judgment Day veracity. At the same time, the soulful sincerity of sermon-style mission statement "Q&A" and heartsick anxiety on the desolate Rhodes piano dirge "I Was So Worried About You" are sold by Pride's emotive agility.

"The first record is screaming, in-your-face rock, but with this one, he's seriously thinking about things like phrasing," notes the group's bassist Nick Moulos. "Not that he didn't think about those things before, but lately, he's really come into his own."

For his part, Pride cites female vocalists like Janis Joplin and Tina Turner as influences alongside Wilson Pickett and Iggy Pop.

"Part of that is having this natural Irish tenor type of voice when I sing," he explains. "The women I like are very emotive. Nick always jokes that inside I'm really a black woman." Pride sometimes refers to himself as "Reverend," but his use of the title isn't standard punk sacrilege. Though not religious in the churchgoing sense, Pride is a man of faith. He rejects the knee-jerk nihilism of Richard Hell's blank generation while embracing the sweet soul music that celebrates humanity in the face of fear, famine, and "fools in the White House who think they can bomb people into freedom."

The struggle between dark and light is the thread connecting Beauty School's title track with its album-closing instrumental string arrangement reprise.

"The guy in the song is saying to God that he wishes there was a beauty school where he could learn to see all of the beautiful things and find reasons to go on in life," reveals Pride. "There's a lot of stuff in the world that drives people crazy, and for me, part of being in a band is reconciling those bad things with what's good."

As for the Round Rock Express, they go down to Nashville 4-1. We reconcile their loss with the goodness of funnel cakes, lemonade, and fireworks blowing up the hot Texas skies.