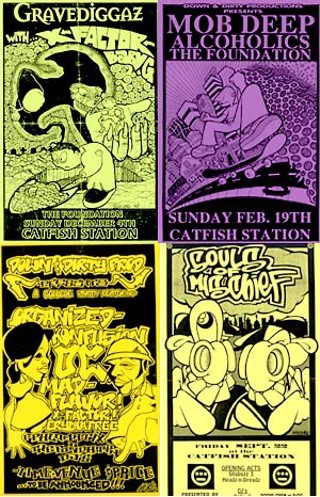 See more art in the sidebar below

As city administrators petition the local African-American community for suggestions on how to improve the overall "quality of life" for blacks in Austin, the perception of the "Live Music Capital of the World" as a discriminatory place for even the musicians themselves remains an undercurrent. Few venues on Sixth Street (and/or the greater downtown entertainment district) cater to the rainbow spectrum of nonwhite communities, and many local rap, jazz, and R&B artists feel they're being shut out from what should be an equal-opportunity shindig.

Ten years ago the situation was similar, but at least back then Sixth Street's now-defunct Catfish Station held down the heart of Old Pecan with an insider's range of African-American music, food, and culture. While appearances by Masta Ace and tha Alkaholiks at Emo's set the stage for prominent rap acts on Sixth Street/Red River, a series of shows hosted at Catfish Station throughout 1995 placed hip-hop in its own element. Visiting headliners made up a who's-who of hip-hop, including Common Sense, the Beatnuts, the Roots, Mobb Deep, Black Moon, the Artifacts, Souls of Mischief, and Del tha Funkee Homosapien.

Nowadays the same brand of hip-hop is more likely featured at Emo's or Stubb's, while the Flamingo Cantina also manages to squeeze in an occasional taste of contemporary backpack rap and the Parish busies itself hosting Scion's monthly DJ showcase. But as local MC Bavu Blakes explains, pigeonholing rappers into distinct categories has splintered what was once a cohesive movement.

"I know that in the days of Catfish Station things were different," he asserts. "There was no such thing as backpack rap. Hip-hop was hip-hop and people got in where they fit in. The Beatnuts, N.W.A, Common Sense, tha Alkaholiks, the Gravediggaz, and Luke Skywalker were technically the same thing. The groups that we now call different from each other used to piece up on each other's shows and rock each other's crowds."

"I was actually told by an owner of several dance clubs downtown to play commercial rap for the frat kids, but when 'more than two black males' are on the dance floor to change over to the Grease soundtrack or some Book of Love shit."

According to the African American Quality of Life Scorecard presented to the Austin City Council in March, only 2.5% of blacks in Austin own businesses. Well-publicized comments made by local police officers during the fire at Midtown Live in February may provide insight into that reality. It's impossible to hold any single entity responsible for the lack of black-friendly entertainment venues downtown, but it might be a good time to re-examine what one might look like.

A decade ago, current Mr. Catfish proprietor Homer Hill extended his lineup of jazz and R&B acts performing at Catfish Station by communing with burgeoning hip-hop promoters. Down and Dirty and Mad Deal Productions financed shows, but, says MC Traygod Shekhem, it was the behind-the-scenes maneuvers of one SXSW stalwart and local visionary that were particularly crucial.

"The person who really got things jumped off Catfish Station was Andre Walker," states Shekhem. "He single-handedly had more impact on this ATX hip-hop community than anyone, without ever touching a microphone."

Catfish Station emerged as the prime outlet for Austin crews, including X-Factor and the Foundation DJs. Priming Del's audience into a fevered frenzy, a nostalgic collaboration between local rap pioneers Tee Double, Teddy Lee, and DJ Cassanova bordered on legendary. Dallas artists including Mad Flavor, DJ Baby G, and Shabazz 3 regularly made trips down to what was becoming known throughout Texas as a hip-hop mecca. Often joining another Dallas group, Heads-n-Dreads, on their boomerang journey, a certain "headwrap chick" performing under the moniker Erycaa Free scored her first big break toward superstardom on the Catfish Station stage. A decade later, four-time Grammy Award winner Erykah Badu works damn hard to preserve the Black Forest Theater in her native South Dallas as a parallel to what it requires to maintain African-American autonomy within an increasingly repressive environment.

Today in Austin the voices of African-American leadership, as expressed by the Reverend Frank Garrett on KAZI's The Wake-Up Call, have been calling for a forum centered around the credo of "for us, by us." While guarded deliberations make perfect sense in order to protect the interests of blacks as defined by blacks, self-imposed isolationism tends to restrict market potential. Helping draw large crowds to Catfish Station in 1995 was marketing aimed beyond the African-American community by way of the former local skate shop Blondie's. In-store appearances by Souls of Mischief and Project Blowed accessed rap fans who wouldn't normally venture into Catfish Station for a steamy R&B set by the Brew or the Bizness.

Located on the Drag, Blondie's served as the stomping grounds for a loosely affiliated team of illustrators put to the task of drawing fliers for Catfish Station concerts. Bunjee Garrett, Robbie Hull, Kelly Edwards, and Nils Leufven bridged the gap between skaters and b-boys by creating a fantasy world where anything zany was bound to happen. Within such a context, seeing throngs of white suburbanites spilling out of the front door of a black-owned club on Sixth Street was hardly a stretch.