Getting healthy, getting high, and getting shot 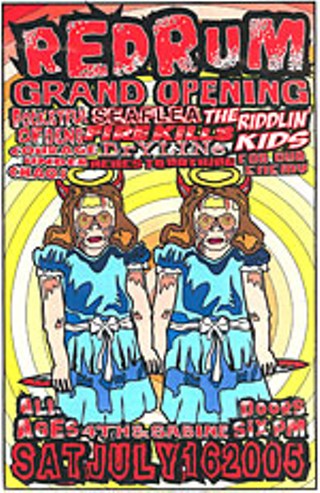 UP ON WALLER CREEK: It's a rare Monday night that finds any club packed, but that was the case at Redrum, where Forever My First, Thumbscrew, 25 Dollar Massacre, the Dailys, and Dear Furious lashed out some tempestuous hardcore. A little more than a year old, the upstairs Sixth Street room is one of the under-21 set's prime destinations, especially if their tastes lean toward Minor Threat, NOFX, and Jimmy Eat World. Thanks to locals like Engraved, Closed Hand Promise, A Pocketful of Deng, Dallas' Dryline, and Warped Tour alumni Firekills, the venue is trading up this weekend, to the old City Grill building at Fourth and Sabine. "We've outgrown this place," says manager Mike Boudreau. "To do the type of shows we want to do, we need more space." They'll get it, upping capacity from 150 to 400, plus a 1,500-square-foot patio overlooking Waller Creek. "There's not another place like it in Austin," raves Boudreau. "Something about it just screams all-ages venue." Another asset is the improved parking, which Boudreau hopes will ease some parents' minds about dropping off their kids. Boudreau expects to be settled into the new digs by the 6pm doors for Saturday's housewarming with the Riddlin' Kids, Firekills, Dryline, Pocketful of Deng, Courage Under Chaos, and For Our Enemy, and is excited about the move for one more reason: "No more damn stairs."

ALAMO JUSTICE: Last Thursday, San Antonio police charged Joseph Gamboa and Jose Najera with one count of capital murder and two counts of attempted capital murder in the June 24 killing of Tacoland owner Ramiro "Ram" Ayala and wounding of employees Denise Koger and Doug Morgan. According to the San Antonio Express-News, a SWAT team arrested Najera, 28, Thursday afternoon, while Gamboa, 22, was already in custody on an attempted murder charge from a shooting spree on the city's South Side two days after Ayala's murder. A witness who played pool with the pair earlier that night identified them for police, as did bartender Koger, who was released from SA's University Hospital last week. Morgan, Tacoland's doorman, remained in serious condition.

WIRING IN: Austin-based circuiteers AMD signed on as a principal sponsor of the Austin City Limits Music Festival last week, joining other Central Texas underwriters like HEB, SBC, and Capital Metro. AMD already provides the digital audio for the TV show, and will use its AMD64 technology to record the more than 130 performances at the Sept. 23-25 event. That includes new adds the Kaiser Chiefs, Blues Traveler, and Jack Ingram, and AMD stage bands like Ambulance LTD, Tortoise, Kasabian, the Frames, and Bloc Party. Festival organizers concurrently released their 2005 grid, and only broke TCB's heart one time by pitting Doves against Rilo Kiley, but the Arcade Fire against Jason Mraz is just fine. (Map your own route at www.aclfestival.com.) Believe it or not, tickets are still left for this thing, at $105 for a three-day pass, but "not many," says producer Charles Attal. 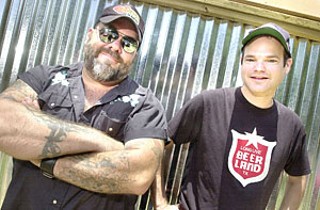 Thanks to the efforts of Paul Minor (r) and Chris Gates (l), the Health Alliance for Austin Musicians, the much-touted partnership between St. David's, Seton, and the SIMS Foundation to provide affordable health insurance to local pickers and singers has removed the stipulation that musicians must make more than $5,000 a year to qualify. "There are a lot of bands who can't play more than once or twice a month, and they were getting left out," says Gates. The original intention was to keep out the dilettantes, says Minor, but the stampede of applicants the alliance expected has yet to materialize. Only some 150 people have enrolled in the program so far, so Minor and Gates have also taken it on themselves to dispel rumors the program is full. One obstacle to getting the word out, says Gates, is that "musicians don't congregate in any one place. We're all at our own shows." Even if they don't qualify for HAAM, Minor and Gates want musicians to be aware of alternatives like Seton's community clinics. Both say their experiences so far in the alliance have been a dream. "I was just in the hospital for a week and it cost $200," marvels Gates, who also used HAAM for surgery to alleviate his chronic asthma. "Stunning." www.main.org/hamm/ The Chronicle's own Andy Langer finds out "What It's Like to Get High With Willie Nelson (and Snoop Dogg)" (l-r, above) in the latest Esquire. When the two, um, rolled through town days apart in January, Langer got twisted with both. We're so proud. Despite his last toke coming an un-Chronicle-like 15 years ago, Langer mellowed down easy with the locally legendary Willieweed, stepping off the bus feeling "like I just rode the bike with Lance." (Huh? Is that good?) Snoop's shizzle, which left Langer catatonic in his car until dawn, was a little more dizzle: "I'm not sure what exactly was in that blunt. Maybe I don't want to know." • KVRX, which is to college radio what the New York Yankees are to baseball (except this year), holds its first benefit of the summer Wednesday at the Flamingo Cantina. Rookie of the Year contenders Ghostland Observatory headline over Alpha Rhythm, the Zom Zoms, and Things That Go Pop. Cover is $3 for over 21, $5 for under.

• Austin loses another band this weekend, as alt-rockers Oliver Future relocate to L.A. to record an album and try to land a guest spot on Entourage. (Hug it out, bitches.) Their swan song is Saturday at Club de Ville, with a special appearance by golden-god alter egos Pudge Zeppelin. Please enter through the out door.

• Hyperkinetic Café Tacuba singer Ruben Albarrán (above) and his four Mexico City mates energized the ACL studios Monday night, and Stubbs the next, with a performance that steered from Pogues-like exuberance (only less drunk) to Albarrán crooning Marc Anthony-style to nasty Stevie Wonder proto-fonk. That explains all those girls dancing onstage, unfortunately an ACL rarity.