Why everyone loves Alan Durham's Sex Drive; Trophy's and a slew of other music-sharing venues reshape the scene 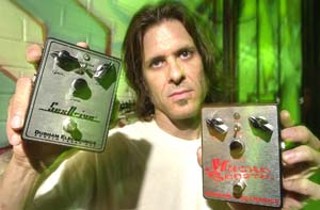 Manufacturing and marketing an effects pedal called the Sex Drive may sound like the setup to a million different punch lines, but if it is, Alan Durham is laughing all the way to the bank. Durham, a longtime local guitarist with Telray, Alejandro Escovedo, and Andrew Duplantis, among others, has parlayed a lifelong aptitude for electronics and 10 years of working on tube amps into a booming business with a clientele that includes some of the biggest names in music. And it all started with a favor for a friend. Charlie Sexton approached Durham in 2001 about designing a pedal that augmented his guitar's sound without distorting it. Durham had never built a pedal before, and though its design took about a year, Sexton was so impressed with the results he quickly told all his friends. Since Sexton was still playing with Bob Dylan at the time, this brought Durham's handiwork to the attention of some heavy hitters indeed. Dylan's other guitarist Larry Campbell wanted one and later called it "the most important piece of gear I have," as did Late Night With Conan O'Brien's Jimmy Vivino, who bought three. Texas-born David Bowie guitarist Earl Slick placed an order after playing on Late Night; other Sex Drive enthusiasts now include Lenny Kravitz sideman Craig Ross, Little Steven Van Zandt, and Ron Wood. Locally, Redd Volkaert, Jon Dee Graham, and James McMurtry head a long list of musicians who swear by their Sex Drives. Typically, people will buy two, one to leave on all the time and the other to employ during solos. "If you need the level to jump, it brings it up and makes [the sound] fatter and tighter," Durham explains. "These are real precision players who can really hear the subtleties." Together with the Mucho Busto, the Sex Drive's more aggressive counterpart, Durham figures he's averaging about 60 sales a month; both pedals retail for $219. He's currently designing a new model called the Crazy Horse. "I don't want to use that guy's name," Durham says, "but you know how that sounds." The incredible demand for his pedals, each built by hand, leaves Durham a lot less time to play gigs, but even that has its advantages. "Now I can pick and choose," he says. The Catch (Photo By John Anderson)

You read it here first: Red River is over. Calm down, nobody's going anywhere – at least not yet. In fact, the Side Bar is expanding to both inside and outside bars, yet for the first time since the Electric Lounge closed, a live music venue off the strip is arguably the hottest rock club in town. And guess where? It's Trophy's, the South Congress dive long known as a place where even hard-bitten regulars were sometimes lucky to escape with all their teeth. About two years ago, tiring of his bar's reputation as the last stop on the road to nowhere, the owner enlisted Good Looks singer/guitarist Matt Drenik to start booking bands his customers had little interest in. "It worked," reports Drenik, who's since formed Lions in the wake of the Looks' abrupt breakup last month. "I haven't seen a fight there in months." Chasing off the old crowd with the instrumental miasma of My Education and like-minded local bands (plus a newly instituted cover charge), Drenik gradually began bringing in friends like Young Heart Attack and the Rockland Eagles to give Trophy's a more straight-ahead rock identity; once Spoon played their so-called "secret" show there in February, the club was firmly on the map. Since then, it's hosted road shows from stoner badasses Bad Wizard and Seattle New Wave cuties the Catch, even as a scene of catchy, quirky Austin acts who postdate the rise of Red River – Things That Go Pop, Handsome Charlies, La La Land, the Unbearables – has coalesced. "The cool thing is, there was no [pre-existing] scene at Trophy's," Drenik says. "These bands can be part of crafting a scene instead of just joining one." Though Emo's and the Continental Club have helped by throwing overflow bookings Trophy's way, as have Rockland Eagle Mark Nathan's improvements to the sound system, Drenik, whose latest get is the Riverboat Gamblers, returns to his experiences in the Looks when asked to explain the club's newfound popularity. "It's really just about playing," he says. "We loved to play there because it's the most fun."

Trophy's may be the most improbable, but it's hardly the only venue to up Austin's live-music ante in recent months. Up by UT, popular cafe Spider House has been booking local and out-of-town talent for its periodic Saturday unplugged series, and offers a surprise DJ every Thursday this month. Roots lovers should investigate Fridays at the Red Fez for Houston imports like the John Evans Band and Southern Backtones (pictured), while the Mean Eyed Cat, a former chainsaw shop turned Johnny Cash tribute bar on West Fifth, hosts occasional shows the Man in Black would approve. Downtown, the Karma Lounge is rapidly turning Eighth and Colorado into Williamsburg south, especially Thursdays with bands like the Chapters and Black Angels. Even Sixth Street is in on the act, with Honky, Tia Carrera, and Scott H. Biram recently tearing up Darwin's Pub. It's getting where you can't throw a rock without hitting someone plugging in an effects pedal.

• As you can see, sometimes a chance to see Paul McCartney fronting U2, Richard Ashcroft join Coldplay for the Verve's "Bittersweet Symphony," the Who (pictured), and a reunited Pink Floyd for Live 8 on a movie-sized screen at Auditorium Shores can't hold a candle to air conditioning.

• The Platforms, whose high-fashion take on garage rock led to a handful of "Best New Band" accolades in last year's Chronicle critic's poll, were nearly lost when three-fourths of the group abruptly quit right before SXSW, but guitarist Junie Tune has recruited new singer Dee Licious, bassist Tia Tiara, and drummer Vaughn Zipper – that's right, a guy – to pull on the go-go boots. They strut back onto the scene Saturday at Trophy's (see Music Listings); appropriate attire a must.

• Clifford Antone, whose History of the Blues and Rock & Roll class is one of UT's most popular courses, has acceded to the overwhelming nonstudent demand and, as of July 20, will start teaching a version for the general public at the One World Theater. Classes run 7-9pm Wednesdays through Sept. 28 (no class Sept. 14) and cost $35 per session or $300 for the whole run. Call 329-6753 to register.

• CMT's Wide Open Country, a twangy spin on 120 Minutes, is now second to only the Austin Music Network (yes, it's still around) in terms of local videos. Besides alt-country godfathers Steve Earle and Lyle Lovett, other Texans in regular rotation on the show include Kevin Fowler, Reckless Kelly, Radney Foster, and might-as-well-be-Texans the Greencards and Cross Canadian Ragweed. Unfortunately, the show only airs once a week (Sundays at 9:30am), because CMT needs the rest of the time to promote the new Dukes of Hazzard movie.

• Moonlight Towers release sophomore full-length Like You Were Never There Aug. 23, which falls in the middle of their tour, so they're offering a preview Saturday at Emo's. For free. The Good Times Crisis Band, Youngmond Grand, and La La Land round out the rhyme-tastic bill.