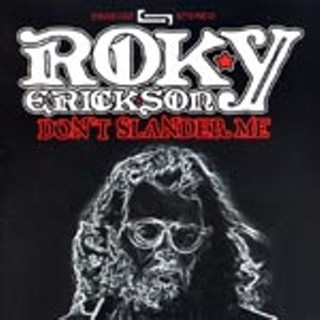 If not for this year's lovingly thorough 2-CD Roky Erickson anthology, I Have Always Been Here Before (Shout! Factory), these reissues would be a much bigger deal. Don't Slander Me and Gremlins Have Pictures were originally released on Enigma's Pink Dust subsidiary in 1986. Recorded in 1982, Don't Slander Me was intended as the follow-up to 1980's Roky Erickson & the Aliens, but CBS's UK branch declined to release it. Listening now, it's hard to fathom why. With a backing band that featured Jefferson Airplane/Hot Tuna bassist Jack Casady, Erickson shreds through the incendiary title track, maintaining an energized growl through the B-movie rock of "Haunt" and the blues-punk bomb, "Crazy Crazy Mama." Graveyard dirge "Burn the Flames" secures Erickson's spot alongside Screamin' Jay Hawkins and Bobby "Boris" Pickett in the Horror Rock Hall of Fame. On the softer side, Erickson's plaintive Buddy Holly homage "Nothing in Return" is a career highlight, while his upbeat revision of 1975's "Starry Eyes" is interesting if not definitive. In contrast to the (relative) cohesion of Don't Slander Me, Gremlins Have Pictures is a sonically spotty hodgepodge of live and studio recordings made between 1975 and 1982. Austin's Explosives back Erickson on the harrowing "Night of the Vampire," the wonderfully muddy "John Lawman," and an unrelenting live take on the Velvet Underground's "Heroin." The original 1977 Rhino single versions of "Bermuda" (later covered by the Minutemen) and "The Interpreter" are here, too. Erickson's solo lyrics tend toward either horror or devotion, but the acoustic gem "Anthem (I Promise)" fuses the two together. The lilting "I Have Always Been Here Before" is another Erickson essential, but like most of the best tracks on these albums, it can now be found on the Shout! Factory anthology. Start there and come here if you can't get enough.